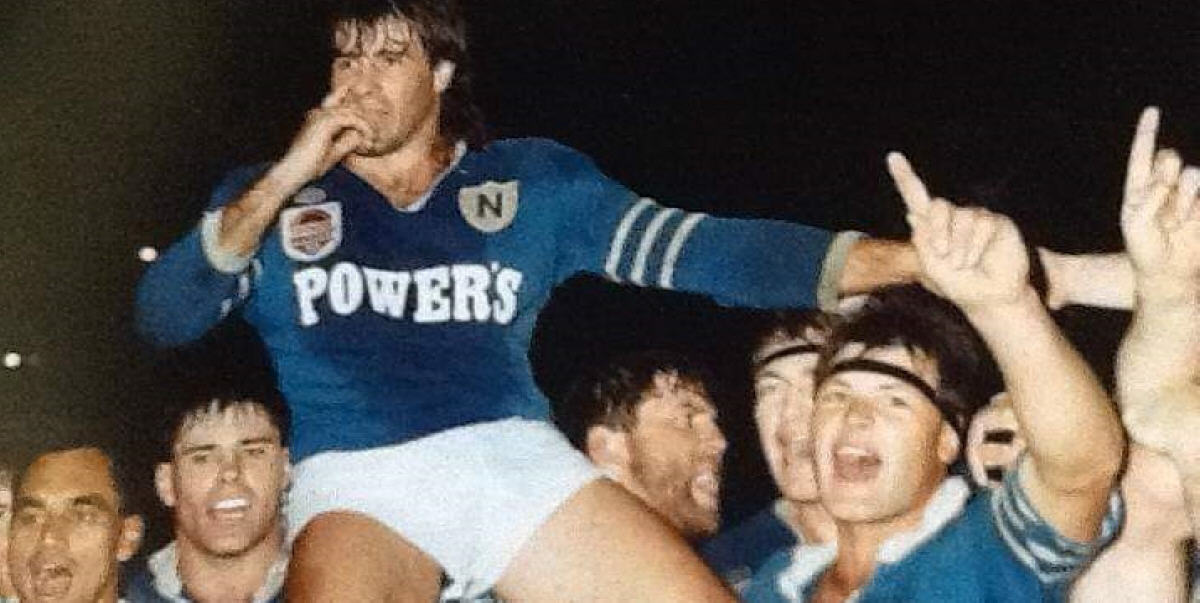 Newtown Jets team captain Fred Teasdell is carried shoulder-high by his team-mates at the end of the pulsating 1992 Newtown-Wentworthville Metropolitan Cup first grade grand final. Teasdell was the perfect choice to lead the Newtown club after the Jets had been in rugby league oblivion from 1984 to 1990. Photo: Newtown RLFC source.

From Out of the Shadows – The Jets in the Metropolitan Cup

This Saturday’s Virtual Season 2020 classic encounter will be the 1992 Metropolitan Cup first grade grand final, played between Newtown and Wentworthville at Parramatta Stadium on the evening of Saturday, 29th August 1992.

You can watch this match at 3.00pm, Saturday, 2nd May on Jets TV, www.newtownjets.com, and follow the contemporary match observations on: www.twitter.com/newtownrlfc

As the Henson Park ground announcer and raconteur John Lynch has observed, we owe an enormous debt to all those players who turned out for Newtown in the Metropolitan Cup years between 1991 and 1999. These are the men who brought the Newtown RLFC back in from out of the shadows of oblivion, and who instilled pride back into our famous royal blue jerseys.

Newtown Jets chronicler Terry Williams wrote in his first club history, Out Of The Blue – A History of Newtown RLFC: “After having been supposedly dead and buried a few years before, the club made a comeback of biblical proportions to rise again and claim a place in the 1992 Metropolitan Cup premiership decider”.

Newtown’s team on that auspicious evening at Parramatta Stadium was as follows (with modern day sponsors in brackets):

We extend thanks to everyone that has supported our Keep The Jets Flying fundraiser. Your generosity is overwhelming.

We recognise that not everyone is in the position to help out financially during these extremely challenging times but if you can, WE NEED YOU!

For full details of the fantastic package on offer, JOIN HERE!

Your support will help ensure we return in 2021 to defend our 2019 Canterbury Cup NSW premiership and the NRL State Championship title.

And a massive thanks to all of our loyal members and sponsors that have stuck with us to help the club through this tumultuous time, regardless of the 2020 season being cancelled.

Messages of good will and best wishes to the Newtown Jets have been received from the following celebrity supporters:

Sir Peter Leitch, the renowned Mad Butcher and high profile supporter of the New Zealand Warriors and the New Zealand Kiwis, rang on Monday to extend his best wishes to the Newtown RLFC and to everyone connected with our club.

He looks forward to when the Jets and the Warriors will be able to play each other again, and for him to catch up with his many friends at this club.

As an informed observer of Newtown Jets news developments, Sir Peter also extended his congratulations to Olga Lauricella for becoming the first female Life Member in the history of the Newtown RLFC.

One of our keenest supporters, Ron E. Sparks, rang on Tuesday to express his good wishes to the club in this seriously-disrupted rugby league season.

He expressed his confidence that the collective strength and character of this club will enable the Jets to be back in action for the 2021 season.

Ron remarked that whenever he has been to a Newtown Jets function or a Jets match that “he feels more whole as a human being”!

The man with one of the smoothest voices on radio had also noted Olga’s ground-breaking Life Membership of the Newtown RLFC.

He said that Olga winning this award sets a terrific example to women everywhere who are becoming more and more involved in rugby league as administrators, officials and players.