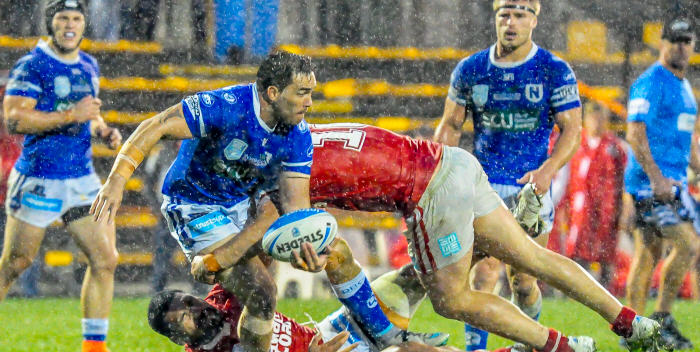 Gutsy Jets get so close to gaining a Grand Final berth

The Newtown Jets 2016 title quest came to an end at Leichhardt Oval on Sunday evening, when they lost 18-10 to the Illawarra Cutters, St George-Illawarra’s partnership club. The scores were 6-all at half-time and Newtown was clinging to a 10-6 lead with just six minutes left on the clock. Two late converted tries took the Illawarra team into a Grand Final appointment against the Canberra Raiders partnership club, Mounties.

Sunday’s match was played in difficult conditions, with light showers falling early in the game and then quite heavy rain cascading down late in the first half and into the second session. Both teams employed strategic kicking games as they tried to keep their opponents trapped in their own halves. Centre Kenny Niko scored first for Newtown when he took advantage of the Cutters’ inability to close down Fa’amanu Brown’s kick into the south-eastern corner. Niko’s try was not converted and Newtown led 4-0 after five minutes. The Cutters responded through a converted try in the 18th minute which gave them a 6-4 lead. A penalty conversion attempt by Fa’amanu Brown in the 22nd minute bounced away off an upright, but he was successful with another shot at penalty goal in the 38th minute which tied up the scores 6-all at half-time.

Coach Greg Matterson stressed to his players at the break that this was the half that would determine whether the Jets advanced to the Grand Final. He urged his men to fight this contest out set for set and to work doubly-hard to support their team-mates in defence. Newtown had completed 15 out of 18 sets in the first half and Illawarra 13 out of 16.

The heavy rain affected the ball-security of both teams early in the second half with Illawarra turning the ball over three times in quick succession. Jacob Gagan, who has been one of the ISP NSW competition’s form players in recent weeks, powered over from dummy-half to score in the north-eastern corner in the 49th minute. His try was not converted and Newtown now had a 10-6 lead.

The latter part of the match was ultimately decided by some contentious refereeing calls and a swag of possession to the Cutters in the last 15 minutes. Possession and field position factors eventually prevailed, with the Cutters scoring a converted try six minutes from full-time, and then sealing the result with another converted try with just three minutes left to play.

In reflecting on the course of the game, coach Matterson said that every member of the Jets team tried really hard and all contributed to a huge defensive effort in the second half. The Cutters glut of possession near the end of the game proved to be decisive. They forced a couple of repeat sets and had a run of four consecutive penalties at a critical stage. In the rain-affected second half, the Jets completed 8 of 15 sets and the Cutters 12 of 20. The Illawarra boys had 11 of the last 16 sets of the game which goes some of the way to explaining the final outcome.

Coach Matterson nominated Jacob Gagan as being Newtown’s most outstanding player on the night. He also said that every other Jets player could be proud of their efforts. While this might not have been the best Newtown team since the Jets entered the NSW Rugby League’s top-tier competition back in 2000, this 2016 squad has certainly turned on some first-class Rugby League entertainment as well as some rousing home game occasions at Henson Park.

The Newtown Jets 2016 Presentation Dinner is to be held at the Petersham RSL Club (Regent Street, Petersham) on Wednesday, 5th October at 7.00pm for 7.30pm.