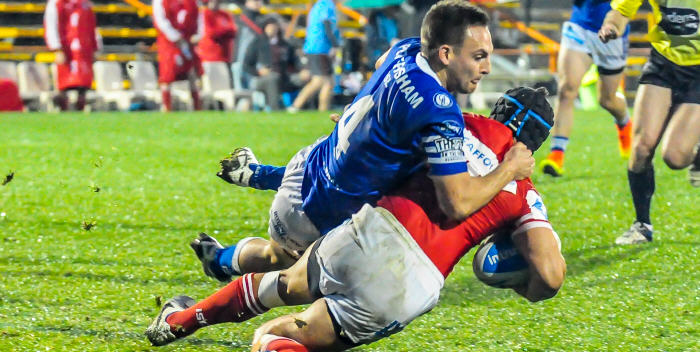 Details of the ISP NSW Preliminary Final between Newtown and Illawarra Cutters, played at Leichhardt Oval on Sunday, 18th September 2016.

It was a titanic struggle between two fiercely-committed teams played in atrocious weather conditions, but the Illawarra Cutters’ two converted tries in the last six minutes have ended Newtown’s brave finals campaign for 2016. There were emotional scenes amongst the Jets players, officials and supporters after the game. This might not have been the best Newtown Jets team to have played in the NSW Rugby League’s top-tier competition in the past seventeen seasons (2000 to 2016 inclusive) but this particular group of men really developed an admirable esprit de corps and sense of mission. We wish all of the 2016 Newtown players, whether they are with the Jets again in 2017 or playing at another club, all the best for the future.

Playing surface: Excellent, although obviously slippery due to the prevailing weather conditions.

Weather: 14 degrees C, light breeze, showers early in the first half, then heavier rain well into the second half.

And here are Michael Magee’s photos from Leichhardt Oval:  https://www.flickr.com/photos/fromthetouchline/albums/72157672941685751

How Matty Buxton from the NSWRL reported on the game:  http://www.nswrl.com.au/news/2016/09/18/cutters_ground_the_j.html

A high swirling kick by Fa’amanu (Nu) Brown forces a mistake from the Cutters.

4th min: Nu Brown’s kick into the left side southern corner ricochets and Kenny Niko grabs the ball and forces his way over in the corner.

Not converted by Nu Brown.

18th min: Illawarra score through Taane Milne 15m to the right of the northern end goal-posts

Then the Cutters get a relieving penalty

24th min: High kick at Newtown’s end not handled safely but Cutters ruled to have knocked on

28th min: Jets go close with a good kick into the Cutters in-goal

36th min: Jets force an in-goal drop-out on the Cutters

Coach Matterson urges a renewed effort from his players.

Everything rides on this half.

The extra tackle sets will be deadly in these wet conditions

Fight this out set for set.

Illawarra kicking off to the southern end.

Neither side has presumably played in conditions like this all season

Not converted from wide out by Nu Brown

Jets line kick in the 52nd min ruled to have been out on the full (marginal!)

Jets forced into another goal-line drop-out

Their defence is under enormous pressure from the Cutters

Another penalty to Cutters with 15 mins left to play

And another Cutters penalty in 69th min