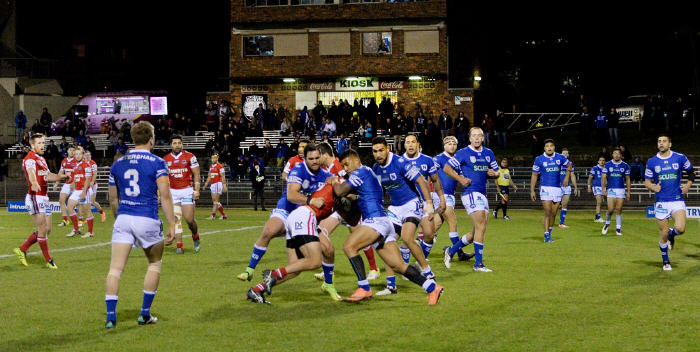 The Newtown Jets and Illawarra Cutters last met under lights at Henson Park on the night of the 1st July. The Cutters finished second on the ISP NSW competition points table after 25 rounds and the Newtown Jets finished fourth. Photo: Mike Magee Photography

It’s the Newtown Jets and the Illawarra Cutters at Leichhardt Oval this Sunday, with the winner going through to the Grand Final.

The match is being live streamed on the NSW Rugby League website (www.nswrl.com.au) and will also be broadcast live by Steele Sports (www.steelesports.com.au)

The experienced and very capable Jesse Sene-Lefao rejoins the Jets for this Sunday’s pathway match into the 2016 ISP NSW Grand Final.

The other ISP NSW Preliminary Final is between Mounties and Wests Tigers, and is also being played on Sunday, 18th September, at Leichhardt Oval. This match kicks off at 3.15pm.

The Illawarra Cutters team is:

Here are some unforgettable You Tube clips from last Sunday’s courageous win against the New Zealand Warriors:

Disturbing news from England that the former Newtown Jet Grant Millington is likely to undergo heart surgery. Grant played with Newtown in 2006 and 2007, and has also played with the Sydney Roosters, Canterbury-Bankstown, Cronulla-Sutherland and the UK club Castleford. The proposed surgery is to correct a heart murmur. Fortunately his condition is not thought to be life threatening and he hopes to resume playing in 2017. Everyone at the Newtown Jets wishes Grant and his family all the best for the future.