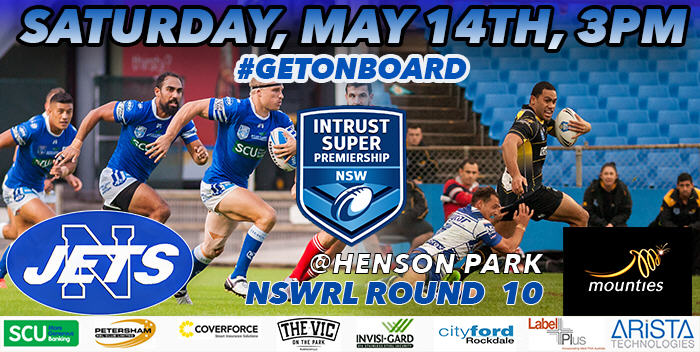 The Jets will pay tribute to women in Rugby League on Saturday, plus it’s the biggest ISP NSW competition match drawcard so far this year.

This match will be broadcast live by Steele Sports: www.steelesports.com.au

Make sure you utilise these excellently compiled and presented club social media services. You’ll get accurate, up to the minute match information from these sources. The club’s email newsletter containing Saturday’s match result and expanded details is very likely to be delayed in delivery this coming week.

This Saturday at Henson Park is Ladies Day, the occasion when the Jets pay tribute to the enormous role played by women in so many aspects of the modern Rugby League game.

The Jets will be raising funds for St Vincent De Paul’s Elsie Women’s Refuge on the day. Located in the Inner West of Sydney, Elsie Women’s Refuge is a crisis accommodation and case management service for women with children who have experienced domestic/family violence. It provides safe shared accommodation with individual bedrooms. For more information: https://www.vinnies.org.au/page/Find_Help/NSW/Domestic_and_family_violence/Elsie_Women_s_Refuge/.

There will be FREE bubbly on offer for all women 18 and over, and plenty of fun for the youngsters on the Hardi Aged Care Family Hill featuring bigger than ever jumping castles, face painting, pass the ball, Ice Cream Joe’s Mr Whippy & Barista along with the mysterious JETMAN..

Young Henrys NEWTOWNER, Natural Lager and Cloudy Cider will be  available for all patrons at Henson Park on Saturday aged 18 and over.

There was another Rugby League international played last weekend – the Cook Islands 30 defeated Lebanon 20 at Belmore Sports Ground on Sunday, 8th May. Three Newtown players – Ahmad Ellaz, Daniel Abou-Sleiman and Tarek Elmasri – all represented Lebanon and the Newtown RLFC extends congratulations to these players on their selection.

Congratulations also to Newtown Jets halfback and playmaker Fa’amanu Brown who was deservedly named as Man of the Match in the epic Samoa v Tonga Pacific Test match at Pirtek Stadium on Saturday night.

And if you haven’t seen David Fifita’s rampaging buffalo-like charge that led to the match-clinching try by Jordan Drew against Wentworthville at Cessnock on Saturday, 30th April, then check out this NSWRL highlights package: http://www.nswrl.com.au/news/2016/05/05/highlights_isp_nsw_r.html

We also liked David’s corn-row hairstyle that he sported while playing for Tonga in the Pacific Test match against Samoa!

Josh Cleeland has made a big impression with Newtown since transferring to the Cronulla Sharks from the 2015 National State Champions, the Ipswich Jets. Josh is a home-grown Ipswich product, having originally played with the West End club in the Ipswich district competition before joining the Ipswich Jets in the Queensland Cup (Intrust Super Cup Qld). Here he is being interviewed by the Rugby League Next Gen media team:

In the former Jets department, there were quite a few ex-Newtown players on show in the recent Wakefield Trinity Wildcats v Toulouse Olympique Challenge Cup elimination match. Tinirau Arona and Jacob Miller were both playing for the Wildcats, and Jonathon Ford and Mark Kheirallah were playing with Toulouse. For the record, Wakefield won by 40-22:  http://www.bbc.com/sport/rugby-league/36197845

If you’re not a member of the Newtown RLFC, please be assured you are still very welcome to join up for 2016. There is no way you can make a stronger statement as to your loyalty to this famous old Rugby League institution, and your membership helps provide an invaluable financial life-stream to the future viability of our club. It might be you’ve been a member in the past – you’re most certainly welcome to rejoin. Please encourage any other Jets supporters you know who aren’t members to get on board. Here is your link to all the necessary information about becoming a Newtown RLFC member: http://bit.ly/1N4xKZ8

There is a great range of 2016 Newtown Jets clothing and merchandise for you to choose from. Naturally you can either buy online or contact the club directly. To check out the range of items and for information about your intended purchases, go to this link:  http://bit.ly/18l7MvE