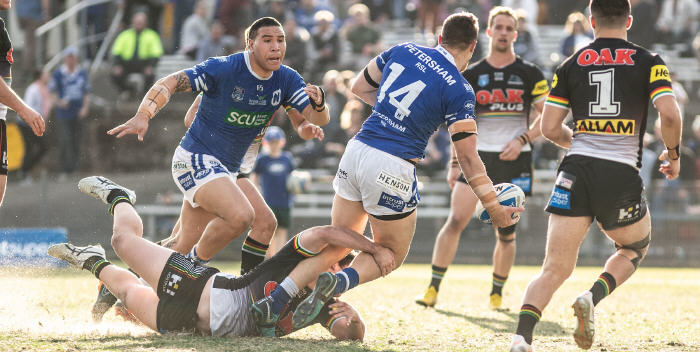 Newtown Jets front-rower Jimmy Jolliffe (Number 14) is about to get the perfect ball away to his fast-supporting team-mate Wes Lolo at Henson Park last Saturday. Photo: Mario Facchini, mafphotography

The Newtown Jets on Saturday drew their biggest crowd to a home game at Henson Park since the early 1980s, but the match result proved to be disappointing. The Jets led the competition leaders, Penrith, 24-10 midway through the second half, but the highly-energised Panthers moved up a gear and staged a come-from-behind 28-24 victory.

The special occasion at Henson Park was the annual Beer, Footy and Food Festival which has attracted big crowds since it was first staged in 2016. Despite the narrow loss, the third-placed Newtown Jets will have learned a lot from this game and will be ready for the Panthers if the two clubs clash again in the finals.

The Panthers opened the scoring when they claimed a try from a quick penalty tap-kick, but Newtown responded with tries to front-rower Kurt Dillon and a brilliant individual effort from halfback Kyle Flanagan. Penrith punished the Jets for a turnover in possession and added another try for Newtown to take a 12-10 lead into the halftime break.

The Jets opened up a useful lead through tries to forwards Jimmy Jolliffe and Wes Lolo early in the second half. As coach Greg Matterson observed, Newtown put themselves under pressure in the final twenty minutes and the Panthers mounted an irresistible surge with three converted tries in the space of eleven minutes. Newtown fought back hard, but Penrith defended their four-point lead into fulltime.

Jimmy Jolliffe and Blayke Brailey were Newtown’s best forwards, while five-eighth Jack Williams was the best back until he was forced from the field through injury.

The Newtown Jets are back at Henson Park next Saturday, 4th August, when they play Blacktown Workers Sea Eagles at 3.00pm. There is a Ron Massey Cup curtain-raiser kicking off at 12.45pm, with Glebe-Burwood (aka Glebe Dirty Reds) playing Cabramatta.

The Newtown-Penrith match was broadcast by Steele Sports.

Here is the updated NSWRL ISP NSW competition table and all the scores from the 20th round: http://live.nswrl.com.au/comp/413e134259bc4ebcf