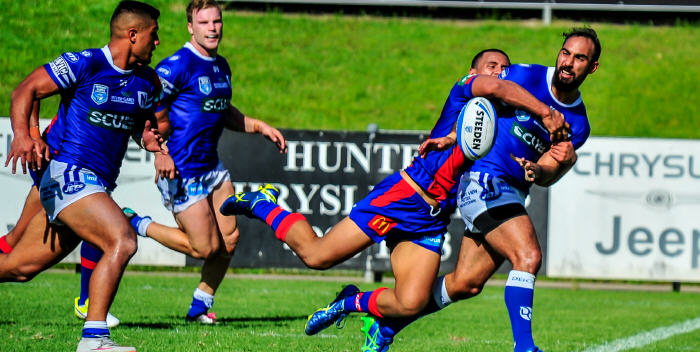 The Newtown Jets overcame the daunting combination of a long-standing away game hoodoo, stifling heat and the defending 2015 premiers when they beat the Newcastle Knights 28-20 at Cessnock last Saturday. The Jets hadn’t beaten the Knights in an away match since 2008 and this game was played at the well-appointed Cessnock Sports Ground.

The Knights were coming off a first round loss and opened the scoring with a converted try in the seventh minute. Jets centre Jordan Drew, who had been forced from the field early in Newtown’s first round draw with Canterbury, scored the first of his three tries on Saturday in the eleventh minute. He then added his second five minutes later. Winger Jacob Gagan broke through the Knights defence and sent fullback Arana Taumata on a forty metre sprint to the line in the twenty-fifth minute. Newtown then had to defend strongly in the last fifteen minutes as they maintained their 14-6 lead into the half-time break.

The game’s third quarter proved to be particularly productive for the Jets, as they added a further three tries through five-eighth Josh Cleeland, half-back Fa’amanu Brown and Jordan Drew (his third) being the try-scorers. Newtown had a tight grip on the game with this 28-6 lead, but coach Greg Matterson was disappointed with the team’s performance in the final quarter. The Jets made a number of mistakes and the Knights had a surplus of possession and dominance in field position, as they scored three more tries to reduce the full-time points margin to 28-20.

Newtown had a number of impressive players in what was a morale-boosting away win, and a fitting reward for Greg Matterson in what was his 200th game as coach of the Newtown club at this second-tier level of Rugby League. Jordan Drew, a Cronulla Sharks NRL squad member and formerly with the Brisbane Broncos, turned on a top-class showing in the centres. Five-eighth Josh Cleeland, a member of the all-conquering Ipswich Jets of 2015, looked more comfortable in his new team environment. Experienced winger Mitch Brown and new signing Travis Robinson also impressed in the backs. Hooker Matt McIlwrick, backrower Anthony Moraitis, frontrower Kurt Dillon and lock Jason Schirnack were the best of what was a strong collective performance from all of the Jets forwards.

The Jets face up to another tough away assignment when they travel across the Tasman to take on the in-form New Zealand Warriors at Mt Smart Stadium in Auckland on Sunday, 20th March.