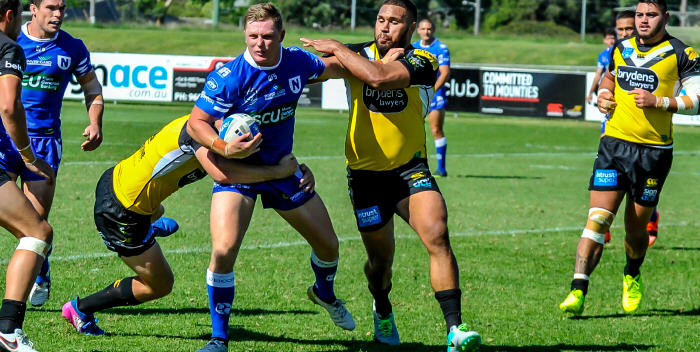 Newtown Jets second-rower Jack Williams is nabbed by the Mounties defence, with Daniel Mortimer (on the left) close by. Photo: Gary Sutherland Photography

Jets brought down by poor defensive decisions and injuries

It was a tough afternoon for the Newtown Jets in their second round ISP NSW match against Mounties out at the Aubrey Keech Reserve. Newtown scored early in the game but several poor defensive options and a horror run of injuries blew the Jets out of this contest. Mounties led 24-10 at halftime and ran out winners by 46-28. The Canberra Raiders ISP partnership club are formidable opponents and they are very strong again this year.

Newtown was running to the southern end of the ground in the first half.

Penalty to Newtown in the first minute. Manaia Cherrington took a quick tap and made a lot of metres.

7th min: Mounties tight, close passing amongst the forwards. Royce Hunt scores to the right of the northern end posts.

Converted by Jordan Turner. 6-all.

11th min: Royce Hunt scores to the left of the posts. Converted by Turner. Mounties lead 12-6.

14th min: Newtown fail to find the line from a penalty kick.

19th min: Mounties causing havoc close to our tryline. Brent Naden scores about 15 m in from the NW corner.

32nd min: Ball moved quickly to the right-side attack, Towers sends Matt Evans in to score to the right of the posts.

Daniel Mortimer is off injured, Manaia Cherrington misses with the conversion attempt.

36th min: Jason Schirnack forces Mounties into another goal-line drop-out, but the Jets lose the ball on the first tackle.

39th min: Naden scores in the next set 10 m in from the NW corner. Converted by Turner.

Mounties turn the ball over from the kick-off.

42nd min: Quick hands again to the right and Matt Evans claims his second try, 15 m in from the NE corner.

47th min: Mounties apply pressure and Reubenn Rennie scores up the right side in SW corner.

53rd min: Mounties take a grip on the game when Dom Reardon scores 15 m in from SW corner. Clever inside ball from Turner engineers the try.

59th min: Jets mount an effective attack but possible try to Ben Fritz in the NE corner is disallowed because of a forward pass by Manaia Cherrington.

63rd min: Makahesi Makatoa ploughs over next to the posts. Converted by Turner. Mounties 42-16.

66th min: Jets gain the ball from the kick-off. Jayden Walker gets close, has the ball stripped and Haydn Peacock touches the ball down for a try 15 m in from NW corner.

Injuries: Malakai Houma, Daniel Mortimer, Kurt Dillon. Jordan Topai-Aveai had been injured in round one, and Kenny Niko received a two-game suspension for a shoulder charge in the Blacktown Workers match.

(Please note: Illawarra are no longer known as the Cutters).