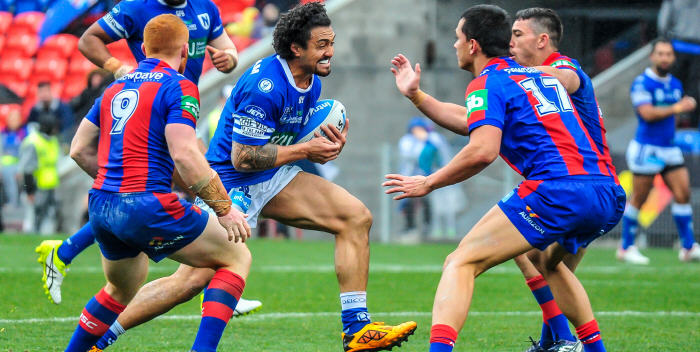 Newtown’s hard-running second-rower Kenny Niko made a solid contribution to the Jets’ win against the Knights on Saturday. Photo: Gary Sutherland Photography

Newtown fielded a changed line-up from the previous Saturday’s win against Penrith, with Jordan Drew, Matt Evans and Anthony Moraitis being unavailable due to injury, and with Fa’amanu Brown and Matt McIlwrick being selected in the Cronulla Sharks NRL team to play the Canberra Raiders. The Knights might have been in last place on the ISP NSW competition table, but having been reinforced with several players with NRL experience and being aware that the Jets were understrength, the men from the Hunter region were primed for an upset. The match was telecast live on Fox Sports 1.

(Tyme Dow-Nikau is the son of Kiwi great and Melbourne Storm premiership-winner Tawera Nikau, and Krys Freeman is the son of one of the most capped New Zealand Rugby League internationals of all time, Gary “The Wiz” Freeman.)

Other ISP NSW 22nd Round scores so far this weekend:

The ISP NSW competition table with one match still to be played in the 22nd Round:  http://live.nswrl.com.au/comp/197

Knights kicked off, running to the northern end of Hunter Stadium.

5th min: Feeney grubber kicked into the in-goal, Jaline Graham was unable to gather cleanly and Feeney grounded the ball and scored.

One Newtown official observed that with the persistent rain and the slippery playing conditions, this match was going to be “a real blood and guts, slogging encounter”.

Knight backrower Mata’utia made a big run out from his own line in the 9th min.

The Knights were making midfield metres and were winning the battle of field position at this early stage.

In the 11th min the Jets made a great supporting surge up the middle, with short passes and eager backing up but … Arana Taumata loses the football right on the tryline.

Kevin Walters commented on Fox Sports that short passing and keen support play through the middle of the field works in any weather conditions.

14th min – Capewell put on a big step, beat two Knights defenders and scored to the right of the southern end goal-posts.

Newtown received their third penalty at the 17th min mark.

Jason Schirnack was injured in a head clash in the 18th min and went off for a concussion test.

This tough hombre is one fellow you wouldn’t want to lose for the rest of the day in a game being played under these conditions.

Kurt Capewell continued to prove to be a handful for his Knights opponents.

Jets knocked on at dummy-half in the 23rd min and an attacking opportunity was lost.

One of Newtown’s most experienced forwards, Junior Roqica, appeared to injure his upper arm in the 24th min.

Newtown would need to make the most of this possession while the breaks were going their way.

26th min – Good pass from Cleeland to Kenny Niko, and showing good footwork and strength the Hawkes Bay (NZ) junior hit and spun his way through three tackles to score to the right of the posts.

Josh Cleeland went close to scoring in the 29th min but the Knights got a 7-tackle set – did the referee get that ruling right?

Good news for Newtown – Jason Schirnack was cleared to return.

Knights attacked down their left-side and Dow-Nikau came back inside on an angle and scored in the 31st min.

Donovan converted from wide out, 12-all after 32 mins.

Knights seemed to be getting quicker play-the-balls going.

Let off for Newtown – Mata’utia broke through for the Knights but died with the ball on the 5th tackle five metres out from Newtown’s line (35th min).

Jacob Gagan and Kurt Capewell caused problems for the Knights when they received good ball.

Lachlan Stein went close for the Jets in the 38th min.

Jets failed to defuse a high kick by the Knights, scrum feed to the Knights virtually in the last second of the first half.

Jets had 54% of possession.

Newtown ran with the breeze and kicked off.

Capewell backed up Graham and then sent it back inside to the fullback who ran around to score under the northern-end goal posts (44th min).

Concerted attack by Knights down their right side nearly brought a try (49th min).

Krys Freeman converted from the sideline, kicking into the rain and breeze.

Roqica is back on for Jets.

Capewell and Cleeland once again led an effective kick chase.

Continued light drizzle affected the handling of both sides.

Knights knock on and then Jets lost the ball on the first tackle in 59th min, stymying an attacking opportunity.

Knights had the better ball control in third quarter.

Both teams tried to put on big defensive shots to force handling errors in the difficult handling conditions.

Jets knocked on behind their own tryline in 62nd min, forced into a goal-line drop kick.

Jets knock on again near their own line in 63rd min.

There have been five Jets handling errors in less than ten minutes.

Cleeland short kicks, regathered but lost the ball over the Knights line in the 68th min.

Clock starting to work against the Jets.

Knights in turn lose the ball in a play-the-ball in Newtown’s 20 metre line in 69th min.

Jets lose the ball in catching a high Knights kick in 73rd min.

Krys Freeman off for a concussion check.

Jets turn the ball over under no pressure in 75th min.

They move the ball to the right looking for the elusive Capewell, but Cleeland switched the direction of the attack.

Taumata positioned Stein well who hit the gap and scored to the left of the northern posts in 77th min.

Knights regained the ball from the short kick-off.

Pass knocked down by Jets in 79th min but had the Knights stepped out first?

Knights grubber kick into the in-goal defused by Jaline Graham.

Knights 51% of possession for game and majority of ball in second half.

Knights had the most missed tackles for the game.

Newtown received 8 penalties to 7, and made 9 line-breaks to the Knights 5.

Newtown Jets centre Kurt Capewell was the deserved winner of the Fox Sports man of the match award.