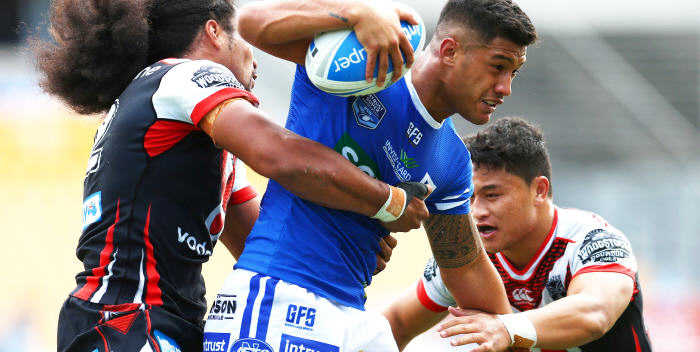 Jets get close to beating the undefeated competition leaders

The Newtown Jets went so close to downing the undefeated Intrust Super Premiership competition leaders, New Zealand Warriors, in Auckland on Sunday. This was an improved display by the Jets in several aspects of their overall performance, but there were a few crucial plays not nailed that ultimately made the difference. The Warriors led 10-8 at halftime and held off a late charge by the Jets to win 24-20.

Newtown had the better of most of the first half and defended their line well against some outstanding attacking play. Jets centre Jordan Drew scored in the 8th minute on the back of some well-crafted ball movement, and he claimed his second try in the 30th minute when he showed immense strength in wrestling his way across the line past several burly defenders. Coach Greg Matterson pointed out to the Jets players at halftime that the main difference between the two teams had been the Warriors’ ability to obtain repeat sets when they were at Newtown’s end, thereby putting the Jets’ defence under greater pressure.

The Jets had a glut of possession early in the second half through receiving several consecutive penalties, which probably should have resulted in more points. The Warriors took their lead out to 16-8, but Newtown narrowed the margin through second-rower Jayden Walker who scored next to the southern end goal posts. The Warriors took advantage of a couple of vital incidents in the second half, which included Jets lock Joseph Paulo’s controversial sin-binning and the Warriors gaining vital possession from an intercept from which they were able to construct a try. The Warriors looked to have sealed the result when they increased their lead to 24-14 with nine minutes to play, but Fa’amanu Brown sent Sam Tagataese in under the posts to ensure a close finish.

As coach Matterson noted after the match, one of the frustrating features of the result was that it had been the best that the Jets had played so far this season, but they still came up just short of a result. His players weren’t far off more wins, but a small number of decisive factors had gone against them in what had been a hard-fought match against the competition leaders. Matterson added that the Jets players attitude and enthusiasm had been first class, but their execution of key plays in vital moments had let them down. The Jets needed to learn from the lessons of this game as they move into upcoming critical matches.

Jets forwards Jimmy Jolliffe, Kurt Kara and big Sam Tagataese had been the best of the pack, and an injury-free Jordan Drew showed great strength and confidence in his performance.

Newtown plays away to the Penrith Panthers this Sunday, 16th April, at Pepper Stadium. This seventh round ISP NSW match is timed for kick-off at 11.45am.