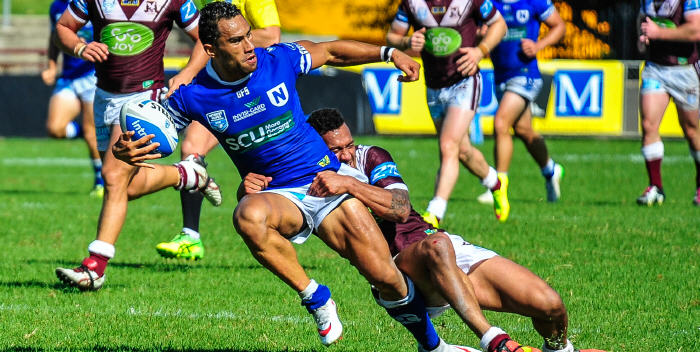 Details of the Fourth Round ISP NSW match between Manly-Warringah and Newtown, played at Brookvale Oval on Saturday, 26th March 2016 by Glen ‘Bumper’ Dwyer.

Best players as nominated by the Steele Sports Radio team:

Other ISP NSW Fourth Round results:

Next Saturday at Henson Park has been officially designated as Hipsters Day.

Want to know what you have to do to fit into this overarching social paradigm – check out this link:  http://www.wikihow.com/Be-a-Hipster

Manly kick off and are defending the Pittwater Road end of Brookvale Oval.

Penalty to Newtown right on the Manly try-line.

11th minute: Arana Taumata puts Jacob Gagan over in the corner, who dives spectacularly to score

Another penalty to Newtown.

Newtown has virtually monopolised possession for the first 15 minutes

Manly get the ball and make good ground.

Manly looking good with the ball when they can get possession.

(Rumours sweep through the crowd that Henson Park ground announcer John Lynch has been rushed to Mona Vale Hospital in a near-catatonic state, because Newtown leads the penalty count in a match at Brookvale Oval for the first time in Rugby League history!)

25th minute: weight of possession tells as Malakai Houma crashes over out wide.

His try was preceded by a passage of inspired ball handling by Newtown.

Manly has done a power of defending.

Fa’amanu Brown is on the field for the Jets and Newtown receives another penalty.

35th minute: Manly on the board through a try to Api Koroisau. Not converted. Newtown 18-4.

Jason Schirnack (Newtown) and Fabian Goodall (Manly) will still be in the sin-bin for the first four minutes of the second half.

Manly would be fatigued from their first-half tackling workload but they would be aware that Newtown’s 18-4 half-time lead against the New Zealand Warriors on the previous Sunday was overtaken.

Arana Taumata has the ball stripped from him.

Api Koroisau is proving a handful for the Newtown defence.

Both teams turn over possession.

Arana Taumata chip-kicks towards the Manly line but the ball is batted dead by the Sea Eagles.

70th minute: Jets on the attack after play sweeps upfield from a quick twenty-metre tap. Several players down with leg cramps.

73rd minute: Mitch Brown defuses a situation for the Jets.

Manly attacking twenty metres out; penalty to Newtown takes the pressure off.

77th minute: Penalty to Manly after ball is stripped in a tackle.

79th minute: Manly throw the ball about in the last minute; Jets hold onto their lead.