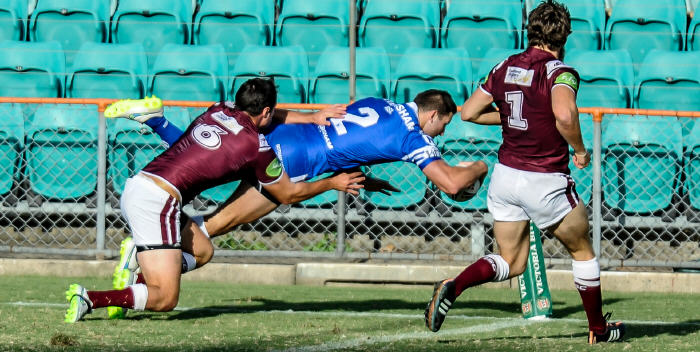 This Saturday’s Intrust Super Premiership NSW match between Manly-Warringah and Newtown at Brookvale Oval is now timed to start at 2.00pm.

Newtown’s team for this Saturday is:

And from the NSWRL website, here is the Wrap, featuring a full review of Round Three and a preview of Round Four, hosted by Steve “Blocker” Roach. “Blocker” was most impressed by the phenomenal hit put on by young Jets prop Kurt Dillon on the fearsome Warriors front-rower Pau Tuli, which is highlighted on this package: http://bit.ly/1XOSFPN

Can’t make it to Brookvale? Then listen to Saturday’s match LIVE from 2.00pm, via Steele Sports Radio at: www.steelesports.com.au

“The Manly Sea Eagles are hoping their unlikely last-minute 26-24 win over the Canterbury Bulldogs is the breakthrough victory for the rest of the season. Manly tackle the Newtown Jets who return from New Zealand with a displeasing 20-18 loss to the Warriors after squandering an 18-4 halftime lead.

Sea Eagles coach Luke Williamson is determined to build upon the side’s first win of the season and has his eye on a number of Jets standout players, pushing to claim NRL positions. “They certainly have some great ability – especially through the halves with (Fa’Amanu) Brown and (Josh) Cleeland, they’ve got great versatility there,” Williamson told NSWRL.com.au. “Up front with Junior Roqica and Jason Schirnack, who’s very good at 13, we have to be quite good to contain those guys.

“It was good to win. It showed the guys what we’re trying to work on will work. It’s just being persistent – in the Intrust Super Premiership NSW, the faces do change each week. It was good, but it’s on again this weekend.”

While they have their hands full with a talent-loaded Newtown team, Manly are more than capable of completing the challenge. “Pita Godinet, our half, is pretty important to the way things are within the side,” Williamson said. “To have some experienced players was good as well. Blake Leary was good (last weekend), Luke Burgess was great up front as was Darcy Lussick. To have that depth of player was great.” (This match preview is courtesy of www.nswrl.com.au)

Fa’amanu Brown missed the 2015 season with a knee injury but he is playing himself back into top form with each game. He was interviewed by Corey Rosser last Sunday at Mt Smart Stadium for the New Zealand website Kiwi League Central: http://bit.ly/1o7TFSR

Christchurch-based Rugby League journalist Will Evans has written a good article on Newtown fullback Arana Taumata in this week’s Big League magazine. “Taumata’s shot at redemption” is on page 4 of Big League (Round Four issue).

Congratulations from the Newtown RLFC to Sydney Roosters and New Zealand international centre Shaun Kenny-Dowall, who plays his 200th NRL match with the Tri-Colours this Saturday at Allianz Stadium. Shaun began his senior Rugby League career with the Newtown Jets and played with the club on numerous occasions from 2006 to 2008.

Start getting ready for Newtown’s next home game at Henson Park against Wests Tigers on Saturday, 2nd April. This match has been designated as Hipsters Day and we all know that the Jets were rated as the world’s leading Hipsters Rugby League club in 2015. Do you want to know how to be a Hipster? Here are some belated tips: http://www.wikihow.com/Be-a-Hipster. Make sure you have some of your own cutting-edge Jets clothing and merchandise – go to: www.newtownjetsclothing.com.au  to make your selection (naturally you can make your purchases online).

As mentioned above you can listen to the live call of Saturday’s Manly-Warringah v Newtown match on www.steelesports.com.au  or you can follow the match on Twitter at: www.twitter.com/newtownrlfc and/or on Facebook at: www.facebook.com/newtownrlfc