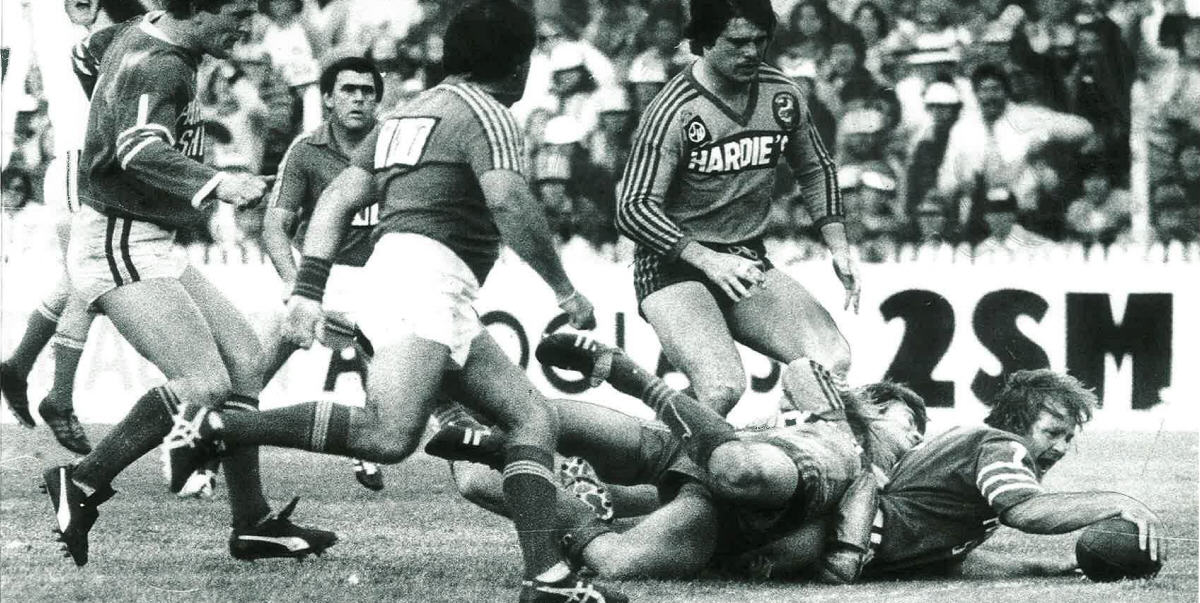 Tommy Raudonikis, pictured here scoring in the 1981 Grand Final, had the honour of captaining his state in the first-ever Origin game.

With the final State of Origin game of 2020 being played this Wednesday night at Suncorp Stadium, we thought we’d look back at some former Jets who have represented their state since 1980. While there have been plenty of players who have featured in Origin football after representing Newtown at NSW Cup level, we have decided to focus on those who have played in this arena after playing first grade at our club.

After playing eight games for NSW under the old interstate format, the then Newtown skipper had the honour of captaining his state in the first-ever Origin game when he led the blues out onto Lang Park in 1980. While that would be his only playing appearance, Raudonikis would go down into Origin folklore during his two series stint coaching the Blues in 1997 and 1998, when he popularised the infamous Catledog call, a battle cry used by NSW players to provoke brawls with their Queensland counterparts.

While more famous for his role in the epic all-in-brawl during Newtown’s 1981 minor semi-final against Manly, earlier that year, Bowden was also part of a three-man Newtown contingent who donned the sky blue. A renowned hardman, Bowden was involved in a couple of hairy incidents, earning a 10-minute stint in the sin bin after going toe-to-toe with Queensland prop Rod Morris.

A crafty hooker, Barry Jensen was selected for NSW after a strong start to the 1981 season. Despite hailing from Sydney, Jensen spent a fair chunk of his career playing country footy in the Sunshine State and currently resides in Townsville.

Despite playing three games for NSW between 1981 and 1983, Phil Sigsworth’s Origin career is recalled by some for his peripheral involvement in an incident that gifted Queensland victory in the third and deciding game of the 1982 series. Phil’s form in the first half of the 1980 season had been so outstanding he was frequently described by commentators as being the best fullback in the rugby league world. A severe jaw injury in mid-1980 almost certainly prevented his selection in the first-ever State of Origin game on the 8th July 1980.

A Wollongong product, Hetherington didn’t actually represent NSW during his 86-game stint with Newtown. However, in 1984, the then Illawarra Steelers centre was selected as a reserve for NSW in Game One of the series. Hetherington would have to wait two years for his second and final origin appearance during which he featured on the wing in a 24-20 Blues victory at the Sydney Cricket Ground.

Like Hetherington, ‘Chicka’ Ferguson didn’t represent NSW during his time at the Jets, however, we’re still going to count him as one of our Origin representatives. After Newtown was expelled from the Winfield Cup at the end of 1983, Ferguson moved to Easts for the 1984 season, and the next year represented NSW during their first Origin series victory. Shifting to Canberra in 1986, he was hampered by injuries for the next two seasons, but returned to the representative arena in 1988 and 1989, chalking up a total of eight NSW caps.

Ok, we’re cheating a little bit here again, but who cares! After his first-grade career ended in 1986, former Jet Phil Gould turned his attention to coaching. After winning premierships with Canterbury and Penrith, Gould took on the NSW job in 1992. He remains the most successful coach in NSW history, with a 58.3% win record and six series victories.