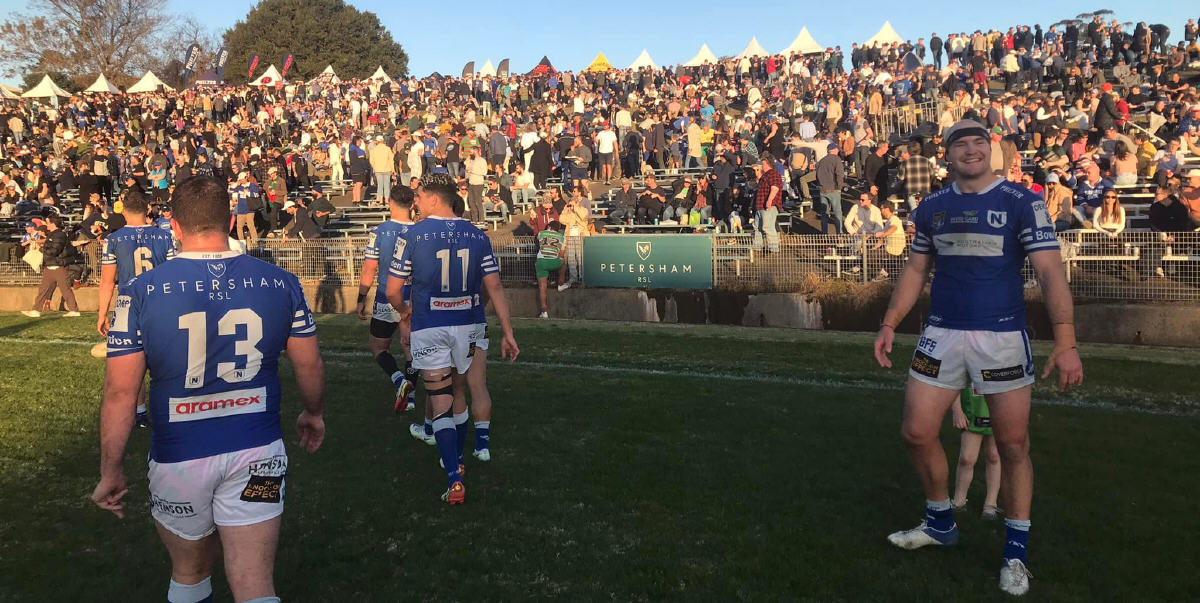 Big Newtown prop Tommy Hazelton (on the right) soaks up the post-game Festival atmosphere after fulltime on Saturday. (Facebook)

The Rabbitohs were fighting hard for a finals place and began with a flourish, running up a 12-0 lead (two converted tries) in the opening twelve minutes.

Newtown rallied and replied through tries to five-eighth Luke Metcalf, front-rower Caleb Uele and second-rower Charbel Tasipale to take an 18-12 lead into the half-time break.

Souths equalised at 18-all early in the second half but once Newtown had some extended possession and field position at the Rabbitohs end of the field, the Jets began to exert their authority.

Newtown’s team captain and halfback Braydon Trindall was in superb form, and was responsible for three try-assists, a try of his own plus seven conversions from seven attempts.

Jets winger Matt Ikuvalu was also in top form, scoring one try from a well-directed cut-out pass from Trindall, as well as making lots of metres up the right-side of the field.

Solid centre Mawene Hiroti ran onto a precisely-flighted ball from Trindall to score in the second half, and the master-class halfback claimed a try for himself late in the second half after Hiroti had burst through the Rabbitohs defence.

Hooker Rhys Davies showed his versatility and range of skills in scoring from a clever chip-kick and regather manoeuvre in what was to be Newtown’s last try of the afternoon.

The Jets forwards took control of the midfield and the edges in the second half, and once Newtown regained the lead through Ikuvalu in the 49th minute the Jet always looked to be in command.

Front-rowers Tommy Hazelton, Jesse Colquhoun, Caleb Uele and Franklin Pele made ground up the middle and back-rowers Charbel Tasipale, Kayne Kalache and Liam Harris tackled effectively and ran strongly with the ball. Billy Magoulias at lock had one of his best games since rejoining Newtown.

Strongly-built centres Mawene Hiroti and Kayal Iro made valuable ground on several occasions and five-eighth Luke Metcalf showed he had retained his elusive form after being out for several weeks.

The big Festival crowd revelled in Newtown’s second half dominance and made this another memorable home-game occasion for the rugby league game’s oldest club.

The NSWRL TV livestream telecast commentary team named Braydon Trindall as the man of the match, and praised all of the Newtown players for the efficient manner with which they had taken control of the game in the second half.

The Jets are back at Henson Park next Saturday (6th August) when they will take on St George-Illawarra at 3.00pm in the 21st round of the NSW Cup.

This was the occasion of the 2022 Beer, Footy & Food Festival.

This match was livestreamed on NSWRL TV ( https://www.facebook.com/NSWRL )

NSWRL TV commentator remarked that the Newtown midfield defence was being “carved up like a Christmas turkey!”

20th minute: Luke Metcalf dashes in to score near the southern goal-posts by way of a sweetly-timed Braydon Trindall pass.

31st minute: A good interchange of passes takes place prior to Braydon Trindall sending in Caleb Uele in to score.

Braydon Trindall converts from close to the posts. 12-all in the 31st minute.

Braydon Trindall finds the line with a long-distance punt kick in the 34th minute.

Newtown’s fast short-passing game leads to a try by Charbel Tasipale (Mawene Hiroti and Luke Metcalf had been involved).

This try was scored in the 37th minute,

Converted from wide out by Braydon Trindall in the 39th minute. Newtown 18-12.
Half-Time: Newtown leads 18-12 after having trailed 12-0 after ten minutes.
Jets under pressure at their own end (Sydenham Road end) early in the second half.
Try to Izaac Thompson from a high kick into the south-east corner.

Converted from wide out by Blake Taafe in the 45th minute. 18-all.

Luke Metcalfe on report in the 46th minute.

Penalty to Newtown in 57th minute when ball is stripped from Lachlan Miller in a tackle.
Trindall forces another goal-line drop-out in the 58th minute.

Mawene Hiroti on report.
67th minute: Long break by Hiroti who sends Trindall in under the posts.

Trindall converts his own try in the 68th minute. Newtown 36-18.

74th minute: Rhys Davies scores a clever kick and regather try next to the goal-posts.

Taane Milne (Souths) on report.
Franklin Pele is penalised for a double movement in the 79th minute.

NSWRL TV commentator says that it was a bit of a tough call.
Full-Time: Newtown 42 defeated South Sydney 18.

The NSWRL TV commentary team named Braydon Trindall as the man of the match. 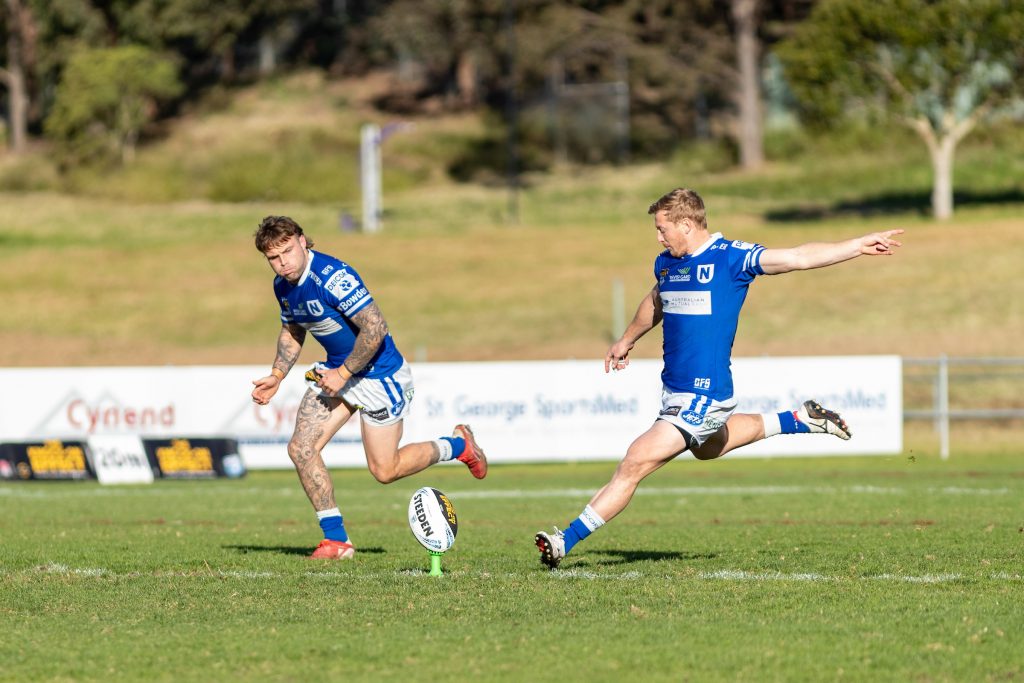 Jets return to top of the Ladder