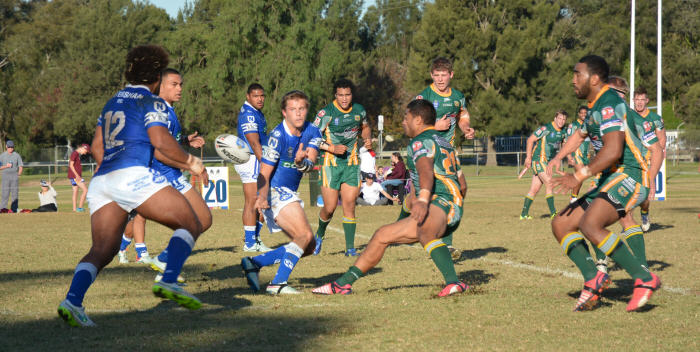 Jets pay the price for their missed opportunities

The Newtown Jets were punished for not making the most of their attacking chances in last Saturday’s match against Wyong in Muswellbrook. This game was part of the NSW Rugby League’s Country Weekend promotion where several NSW Cup fixtures were staged at selected regional venues. The Wyong Roos defeated Newtown 28-12 after leading 10-0 at halftime, with Wyong’s final two tries coming in the last six minutes of the game.

This match was certainly a full-blooded physical contest and Newtown’s forward pack lost nothing in comparison to their Central Coast opponents in terms of the midfield confrontation. There was no score in the game for the first 22 minutes but Newtown had failed to make best use of a couple of attacking opportunities in that first quarter. Wyong’s second try came in the 32nd minute after a Jets midfield chip kick had gone astray and presented the Roos with possession in a favourable attacking position. Newtown then failed to capitalise on another try-scoring chance three minutes before half-time.

The Jets made a determined start to the second half and halfback Todd Murphy broke through to score in the 47th minute, with Nathan Gardner’s conversion making the score 10-6 in Wyong’s favour. The Central Coast boys looked to have taken control when they scored two tries down their left side in quick succession, extending their lead to 18-6 midway through the second half. The Jets fought their way back into contention by way of a blockbusting try to the hard-working Ray Moujalli in the 64th minute, and Gardner’s second conversion narrowed the margin to 18-12. Yet another missed scoring chance in the 71st minute seemed to typify Newtown’s misfortune on the day – getting into potential scoring situations but failing to make best use of the opportunities presented.

Wyong’s fifth try six minutes from fulltime ensured their win, and their final try two minutes out from the siren was through some weary and dispirited defence. The Roos had scored six tries to two and had made the most of their scoring chances, in contrast to Newtown’s impetuous play and poor end of set options.

Newtown’s forward pack had worked hard and had the edge for much of the game in the battle of the midfield. Long-serving front-rower Ray Moujalli is probably in his career-best form with his determined ball carries and tough defence. The Jets might not have won on Saturday, but they made plenty of friends in the Hunter Valley when they invited a big group of Muswellbrook junior rugby league players to their Friday afternoon training session on Olympic Park. Muswellbrook club officials were full of praise for the Newtown Jets players and staff, including their other-worldly club mascot the Jetman, for their friendship and generosity to the Muswellbrook Rams youngsters. The Jets visit will be long remembered.

The Newtown Jets travel away next Saturday (13th June) to WIN Stadium, Wollongong for the 14th round NSW Cup clash against the Illawarra Cutters. This game is set down for a 3.00pm kick-off.