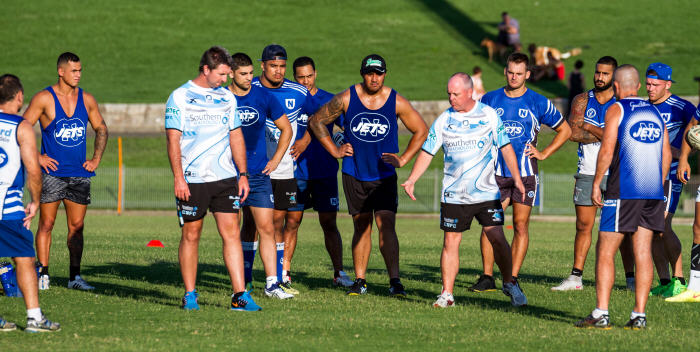 The Newtown Jets play their first trial game for 2016 against North Sydney on Saturday, 6th February, with the match timed for kick-off at 4.00pm. It is anticipated that the game will be played over four twenty-minute quarters. The Jets pre-season squad has been put through a tough summer training program which commenced in early November, and the squad members will no doubt relish the opportunity for some real Rugby League action.

Jets head coach Greg Matterson says that the squad members have acquitted themselves well right throughout the rigorous summer regimen, with many training sessions conducted in stifling humidity. The Jets are partnered with the Cronulla Sharks in the NSW Cup competition, and several Sharks NRL squad members will be made available to reinforce Newtown’s NSW Cup team when the competition rounds get underway in early March.

The Jets coaching staff members are confident that this is a well-prepared Newtown squad, with all the players primed to stake their claims for places in the eventual starting line-up in Round One of the NSW Cup competition. New Jets signings Jaline Graham (ex-Canterbury Bulldogs), Jason Schirnack (ex-Wests Tigers) and Arana Taumata (most recently with Tumut and South Newcastle) are expected to play on Saturday. Several other members of Newtown’s squad for Saturday played NSW Cup with the Jets in 2015 while the other trialists are from a variety of club backgrounds.

North Sydney, like Newtown, is one of the NSW Rugby League’s 1908 foundation clubs. The Bears have been active in the players’ market in the off-season and will bring a very capable squad to Henson Park for this Saturday’s trial. Norths are partnered with the South Sydney Rabbitohs in the NSW Cup competition.