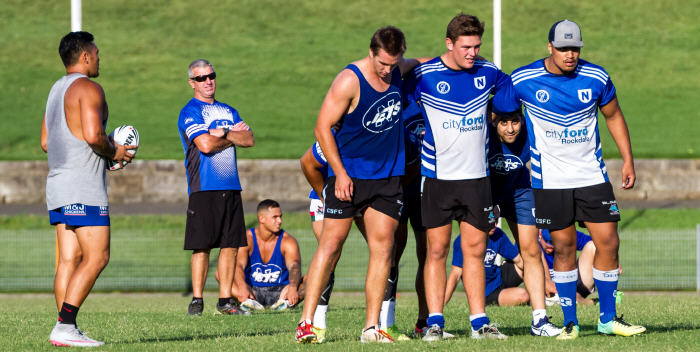 And now the 2016 Rugby League season gets underway ….

The Newtown Jets will play their first trial game for 2016 at Henson Park this Saturday, 6th February, against North Sydney at 4.00pm. The Jets pre-season training squad has been put through a rigorous summer training program that began back in early November. Saturday’s trial against the Bears gives the young Jets trialists the chance to stake their claims for a place in Newtown’s team for the opening round of the 2016 NSWRL NSW Cup competition.

Newtown’s other trial dates are:

Sunday, 14th February 2016; several Newtown players will be chosen in the Cronulla-Sutherland NRL trial squad that will play Manly-Warringah at Shark Park, to kick off at 5.00pm.

NSWRL VB NSW Cup – Round One:

Get ready for the annual Newtown Jets Supporters Rally Day:

The attractions will include: Get to meet the 2016 Newtown Jets players and staff (plenty of photo opportunities); the ever-popular Jetman and Syd the Pig will both be there; jumping castle; ice-creams; give-aways; a DJ will be in attendance; all told it will be a fabulous afternoon for the kids to meet their very own Local Heroes – the Newtown Jets!

The 2016 Rugby League season is well and truly with us, and the best way you can show your loyalty and support to Australia’s oldest Rugby League is by becoming a 2016 member by either joining up or renewing your membership. Revenue from annual memberships is a critical aspect of our club’s revenue stream. Please go this link to make your choice of 2016 Newtown Jets membership package: http://www.newtownjets.com/jets-membership-2016/

Rugby League Week magazine last year rated the Newtown Jets as the greatest Hipster Club in the world of Rugby League. Make sure you have some of your own cutting-edge Jets clothing and merchandise – go to: www.newtownjetsclothing.com.au to make your selection (you can purchase online).

Alberto Talarico, the legendary mine host of Alberto’s Pizzeria Restaurant at 589 King Street in South Newtown recently celebrated his 80th birthday. Everyone at the Jets sends congratulations and wishes Alberto good health and good fortune for the future.

You saw the film – now see the stage production …

The winner of the Jets quiz in a recent newsletter (6th January 2016) wished to remain anonymous. The winning answer was: Fred Teasdell captained Newtown in their Return to Rugby League match on the 30th March 1991, and Stuart Raper captained Guildford, the opposing club that day.

This newsletter’s quiz question is: Who scored the first try for Newtown in the 2012 NSWRL VB NSW Cup Grand Final played at ANZ Stadium on 30th September 2012? Email your answers to jets@newtownjets.com The sender of the first correct answer received will win a top quality Newtown Jets cap from our merchandise store.

The following companies, organisations and individuals have committed to the Newtown RLFC for the 2016 season, and we are all very grateful for their assistance. Please give them your support in recognition of their generosity in helping to keep the Newtown Jets dream alive: