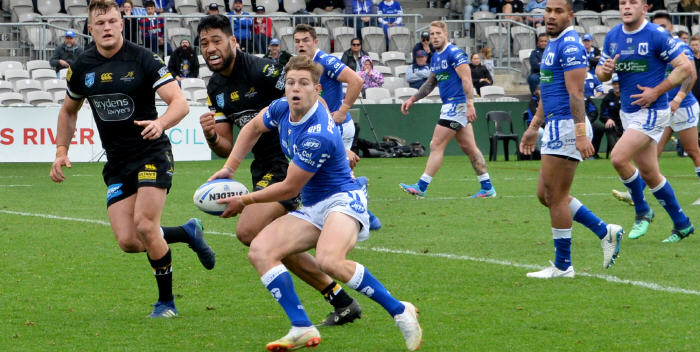 Blayke Brailey (pictured with the ball in the ISP NSW elimination semi-final against Mounties) has been named as the Newtown RLFC Best and Fairest for 2018. Photo: Michael Magee Photography

Jets put disappointment behind them as they make ready for 2019

Two players who are currently in camp with the Junior Kangaroos, Blayke Brailey and Kyle Flanagan, won two of the major awards at the Newtown Jets 2018 Presentation Night. The function was held at the Petersham RSL Club on the evening of Tuesday, 9th October.

There was a thoroughly upbeat mood at the event despite the acute disappointment in the wake of Newtown’s narrow 18-12 loss to Canterbury-Bankstown in the NSWRL Intrust Super Premiership grand final.

The Newtown Jets are partners with the Cronulla-Sutherland Sharks and the two clubs begin a new five-year partnership commencing on 1st November 2018.

Speakers at the Presentation Night included Newtown Jets President Barry Cotter, head coach Greg Matterson, NSW Rugby League CEO David Trodden and the Cronulla-Sutherland RLFC CEO Barry Russell. Mr Russell spoke very positively about the strength and viability of the Sharks-Jets partnership, and he recalled his own playing days with Newtown back in 1992 when the Jets won the Metropolitan Cup first grade premiership.

Other distinguished guests on the night included Lynda Voltz MLC (NSW Shadow Minister for Sport and Veterans Affairs) and Darcy Byrne, Mayor of the Inner West Council. Kris Gale from Fire Up! provided the subject for an entertaining interview and Mary Konstantopoulos from Ladies Who League was another prominent identity in the crowd. The ebullient Alby Talarico was a more than capable compere for the evening.

Most Consistent Player: Jack A. Williams