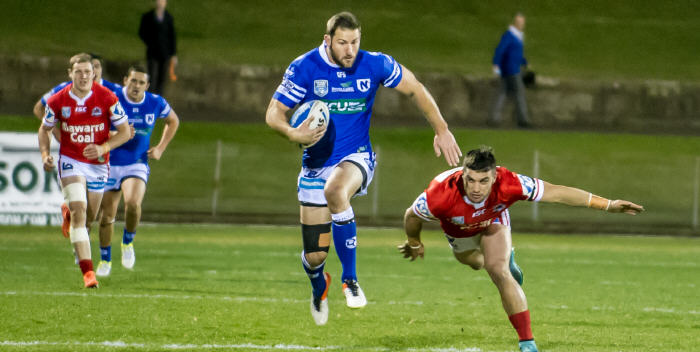 Jets run down by the new competition leaders

Newtown led 14-10 at halftime in this deferred 13th round Intrust Super Premiership match, but were outplayed by the Illawarra Cutters in the second half. The Cutters are the new competition leaders and proved on Friday night that they are strong premiership contenders. The Jets went into this game with several late changes and despite an outstanding first half were held scoreless in the second forty minutes, as the Cutters powered away to a 38-14 win.

Weather: Clear night sky, 12 degrees C, down to 10 degrees C by the second half.

Daniel Abou-Sleiman, Brendan Hikaka and Ahmad Ellaz came into the named 17 (18 players had been named in the original team line-up).

The electronic scoreboard and time-clock malfunctioned in the first half and made it difficult to maintain the match time-line accurately.

Young front-rower Harrison Muller left the field for a concussion test around the 25th minute mark of the first half and was ruled out for the rest of the game.

Brendan Hikaka was on debut with Newtown and most unfortunately appears to have suffered a broken jaw. He left the field in the 33rd minute of the second half.

Other ISP NSW matches played on the weekend:

Mounties and North Sydney had byes.

Illawarra Cutters kicked off with Newtown running to the southern end.

Plenty of pressure early on the Cutters line but they displayed good on-line defence.

Fa’amanu Brown cuts through in the 7th minute to score to the left of the posts.

He converts his own try. Newtown 6-0.

A penalty to Illawarra midfield in the 10th min.

The Cutters show good passing and eager support play, and score in the north-west corner through Levi Dodd in the 12th min.

Illawarra continue to defend very well in their own 20 metres zone.

Newtown penalised for stripping in the 16th min.

Cutters have a try disallowed in the 17th min.

Mitch Brown gathers in an Illawarra short kick while being put under great pressure.

Penalty to Newtown in the 18th min relieves pressure.

Another penalty to Illawarra prompts Newtown coach Greg Matterson to send out a message urging his players to improve their discipline.

Kurt Kara is putting on some tremendously strong tackles.

Cutters slowing the Jets down at the play the ball to their advantage.

Midfield break by the Cutters in the 23rd min ends in a runaway try to Adam Quinlan.

Matterson felt that Newtown was being let down by the standard of the finishes to their sets.

Penalty to Newtown on the halfway line in the 27th min

Fa’amanu Brown cuts through again to score in the 27th min.

Harrison Muller is taken off for a concussion test.

The scoreboard and time clock are out of commission due to a technical glitch, and Harrison Muller is ruled out for the rest of the game.

Cutters on the attack at Newtown’s end, short kick is snapped up by Jaline Graham who dashes down the right-side touch-line, gets the ball back inside to Mitch Brown who sprints 80 metres to score in the south-west corner.

The Cutters knock on the kick off.

Jets at Illawarra’s end, held up over the try-line.

Matt McIlwrick and Jaline Graham both go close to scoring in the 7th minute.

The Cutters get their off-loading game going and they score in the 8th min.

Matterson sends out the message for Newtown to lift their defensive effort.

Both teams kick the ball dead when in attacking positions.

Cutters tackled with the ball I their own in-goal zone.

Saulala Houma goes close to scoring in the 14th min of the second half.

Matterson sends out another message – defence is going to win this game.

Cutters looking dangerous with the ball and are getting their off-loads working.

Both sides made handling errors and kick the ball dead at the end of sets.

Illawarra defends well in their own quarter and then get a penalty near their own line.

Cutters score late in the next set in the 26th min

Hutchison is the try-scorer; Dodd converts.  Illawarra leads 22-14 with 13 mins to go.

Cutters score in the ensuing set, Jets defence has deteriorated

Brendan Hikaka is injured and comes off in the 33rd min

Matthews scores for Illawarra in the last minute, try not converted.

Illawarra has scored 4 tries in the last 15 minutes and have kept Newtown scoreless in the second half.

Second half penalties: 2-all.

Match penalties were 6-all.