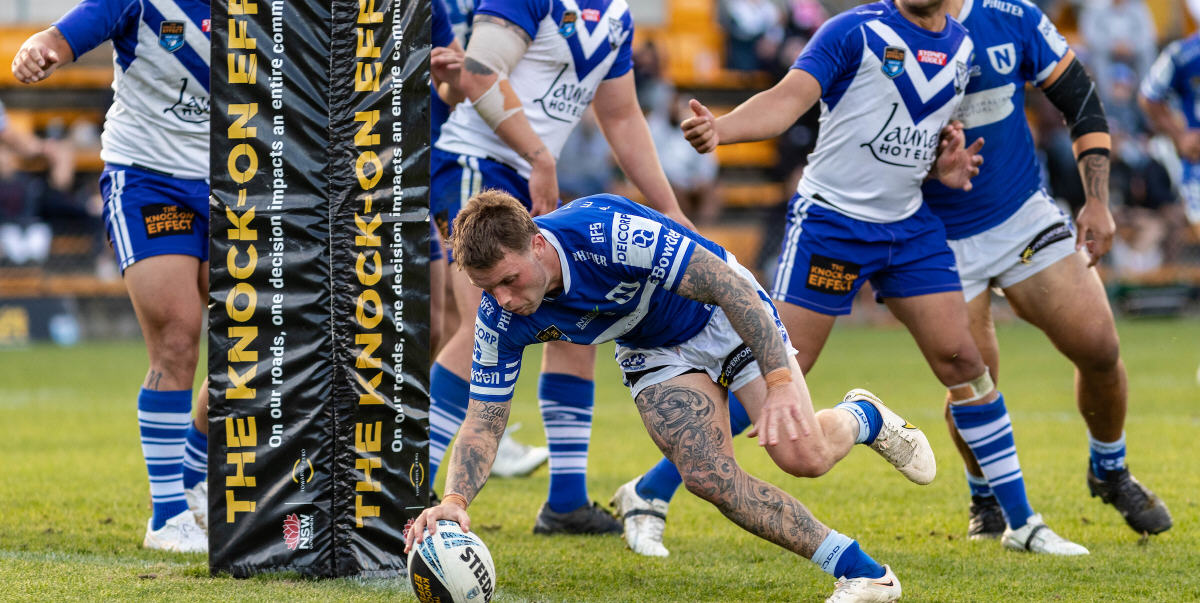 The Newtown Jets have bowed out at the Preliminary Final stage of the 2022 Knock-On Effect NSW Cup, after losing 28-26 to Canterbury-Bankstown at Leichhardt Oval on Saturday, 17th September.

The Bulldogs had a particularly damaging first half, leading 22-6 after 27 minutes and 26-10 at halftime.

The Jets made a spirited start, spending several minutes in Canterbury’s territory before the NSW Cup Player of the Year award winner Kayal Iro burst through to score in the fifth minute, assisted by quality passes from Braydon Trindall and Rhys Davies. Trindall’s conversion from wide out gave Newtown an early 6-0 lead.

The Bulldogs scored their first try in the 11th minute from a pinpoint cross-field kick by their halfback. Two more tries in the next ten minutes from more well-placed kicks enabled Canterbury to extend their lead to 16-6.

The Bulldogs pushed their lead out to 22-6 with another try in the 28th minute, which originated from a Newtown goal-line drop-out that had gone awry.

Jets centre Reubenn Rennie scored from a precise Braydon Trindall pass to reduce Canterbury’s lead to 22-10, but another Bulldogs try just prior to halftime enabled Canterbury to take a more than significant 26-10 lead into the break.

Newtown began their second half resurgence with due urgency, with another quality Trindall pass sending Reubenn Rennie over for his second try. Trindall added the extras from wide out to make the score 26-16 in Canterbury’s favour.

The Bulldogs scored their only points for the second half with a penalty goal in the 50th minute. The ‘Dogs obligingly bombed a certain try in the 54th minute that would have made Newtown’s comeback task that much harder.

It was most certainly game on when hooker Jayden Berrell and lock Billy Magoulias sent the young Jets winger Tom Rodwell (who had been a late inclusion in the team) over to score in the south-western corner, narrowing the deficit to 28-20.

Trindall’s conversion attempt from near the sideline agonisingly bounced away from the right-hand upright.

The stage was set for a dramatic final quarter and Newtown edged even closer when Jayden Berrell dashed over to the left of the posts, having received an inspired offload from big prop Vincent Rennie.

A well-judged grubber kick into the Canterbury in-goal by five-eighth Rhys Davies had given the Jets the field position that led to Berrell’s exhilarating try.

Trindall’s successful conversion saw the Bulldogs clinging to a 28-26 lead with eight minutes left to play.

The tension was massively ramped up when the Jets received a penalty just in from the right-side touch line in the 79th minute.

Trindall’s penalty goal attempt was unsuccessful and the Bulldogs held on to win 28-26 in what had been a truly absorbing second half.

Newtown’s considerably-changed team line-up had made the Jets task more problematic, and the four tries conceded within a fifteen-minute time span in the first half ultimately proved too difficult to run down.

Canterbury-Bankstown had scored five tries in the first half and although Newtown had scored 16 points to 2 and kept the Bulldogs tryless in the second half, Canterbury managed to hang on for a very narrow victory.

It was a bitterly disappointing finish to Newtown’s 2022 finals quest. Still, as one veteran Jets supporter noted, it was good to see Newtown playing finals football again after two consecutive NSW Cup seasons destroyed by COVID.

It would have been interesting to see a full-strength Newtown team taking on the Penrith Panthers in the NSW Cup grand final, but Saturday’s narrow loss put paid to that intriguing possibility.

Newtown’s best on Saturday had been Jayden Berrell, Jesse Colquhoun, Charbel Tasipale, Billy Magoulias and Tommy Hazelton in the forwards, and Braydon Trindall, Rhys Davies and Reubenn Rennie in the backs. Tom Rodwell had an impressive second half on what was his 21st birthday.