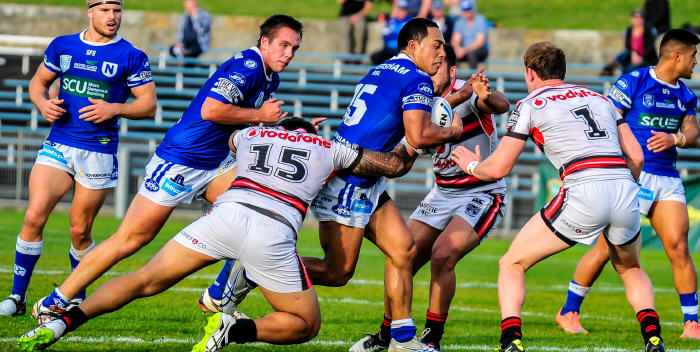 Long-serving Jets player Kurt Kara has really adapted well to playing at lock-forward and he was Newtown’s best against the New Zealand Warriors at Henson Park on Saturday. Photo: Gary Sutherland Photography

Details from the ISP NSW 15th Round match between Newtown and the New Zealand Warriors, played at Henson Park on Saturday, 18th June 2016 by Glen ‘Bumper’ Dwyer.

The Newtown Jets turned on a most impressive first half display against the top of the table New Zealand Warriors, who were coming off a seven-match winning streak. The Jet led 24-6 at halftime and then shut the Warriors out of the game in the second half, adding two more tries late in the match to run up an imposing 38-6 winning margin.

Newtown remains in third place on the ISP NSW competition table behind Mounties and the Warriors, but the Jets now have the best points for and against in the competition.

The NSWRL ISP NSW competition table after 15 rounds is:  http://www.nswrl.com.au/intrust-super-premiership-nsw/ladder1.html

Here are the results of all the other 15th round matches:

The New Zealand Warriors team was:

Newtown to kick off and running to the Sydenham Road end of the ground (southern end).

Under early pressure from the Warriors but the Jets defence holds strong.

Penalty to Newtown 40 metres out from the NZW try-line.

Another penalty to Newtown 10 metres out from the Warriors try-line.

Try scored in the 6th minute

Penalty to Newtown on halfway.

Nu Brown’s in-goal grubber kick causes a great scramble, but it is grounded for Newtown by Travis Robinson in the south-eastern corner

Converted from wide out by Nu Brown

Great break by Josh Cleeland inside his own half

As the defence converges on him he kicks infield

The Warriors reciprocate by knocking on in the next set

Penalty to Newtown midfield in the 20th min

Penalty to Warriors in the 22nd min

Jets work the ball down to the southern end

NZW turn the ball over virtually on their own line

Newtown puts in a well-controlled set, ending with Nu Brown kicking into and finding touch in the NZW right-side corner (32nd min)

Mason Lino scores and converts his own try (38th min)

Jets coach Greg Matterson hammers the message into his players

Don’t let them back in, shut them down

Jets running to the northern end

Is the anticipated Warriors fightback going to materialise?

Newtown loses the ball in the 46th min

Another good line kick by Nu Brown in the 56th min

Harrison Muller off the field for a head-knock check

Great take of a high ball by Mitch Brown

Penalty to Newtown in 58th min

Penalty is 40 metres out from NZW line

Jets lose the ball 30 metres out from NZW line

The Warriors in turn lose the ball in the next set

Kenny Niko goes close to scoring in the 65th min

Penalty to NZW 30 metres out from Jets line

NZW held up over the Jets try-line (67th min)

Newtown up 8-4 in penalties after 69 mins

Cleeland cuts through, kicks ahead and Capewell snaps it up to score a spectacular try at the north-eastern end (72nd min)

Ipswich Jets combination from 2015 coming to the fore

NZW drop the ball in their half in 77th min

Despite late withdrawals and injuries affecting the Newtown line-up, the Jets rose to the challenge today.

Strangled them out of it in the second half

Great credit to you all

Warriors made a lot of errors in the first half

We took our chances and opened up a lead

In the second half we had to defend for extended periods

They were coming off a seven-game winning streak

He has adapted to playing at lock very well

Special mention to all the Newtown part-timers who stepped up for this crunch game and took on the challenge with huge enthusiasm.

Warriors coach Stacey Jones praised Newtown’s performance and said his own team had paid the price for their errors. He jokingly pointed out that the Newtown Jets had eight former New Zealand players in their 17 at Henson Park for this game and that undoubtedly explained their good form!

Newtown Jets Director and financial mainstay Terry Rowney said that this year the mix of Cronulla NRL full-timers and Jets part-timers is working particularly well. The part-timers had all stood up today and really got stuck in. He was very impressed with the enthusiasm and skills of the two boys from the 2015 Ipswich Jets National Second-Tier Championship team, Josh Cleeland and Kurt Capewell, who have contributed a lot to Newtown’s wins and place on the table. Now we have to get ready for the new emerging challenges from the likes of the Panthers and the Cutters.