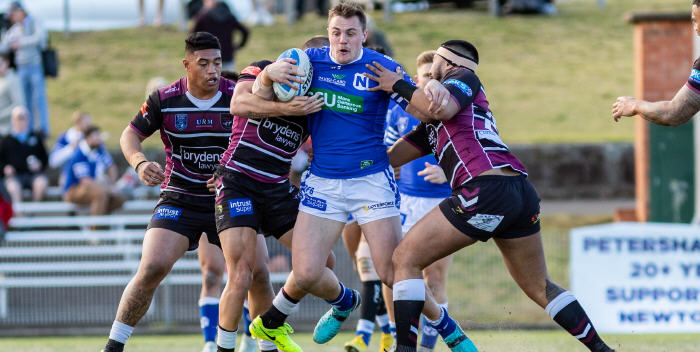 The Newtown Jets had their share of misfortune both prior to and during Saturday’s match against Blacktown Workers Sea Eagles at Henson Park. Newtown led the Manly-Warringah partnership club 12-8 at halftime, but a combination of errors and penalties incurred by the Jets enabled the Sea Eagles to score three converted tries in quick succession to lead 26-12. Newtown staged a stirring rally in the last five minutes but went down narrowly 26-24.

Newtown went into this match with three late team changes all due to injury. This situation was compounded when Jets forward leader Braden Uele left the field with an injured knee five minutes into the first half. Fullback Will Kennedy and centre Lachlan Stein also incurred injuries which left Newtown with a makeshift backline. The Jets trailed 8-0 midway through the first half and then looked to have found their rhythm with two converted tries to Reubenn Rennie that enabled Newtown to lead 12-8 at halftime.

The Jets missed a prime try-scoring opportunity early in the second half which might have changed the direction of the game. The Sea Eagles capitalised on Newtown’s errors and conceded penalties to score three converted tries in the space of ten minutes midway through the second half. Rennie claimed his third try and second-rower Briton Nikora also scored as Newtown turned on a barnstorming finish that fell short by two points.

The Jets have a bye in the Intrust Super Premiership next weekend and then host the New Zealand Warriors at Henson Park on Saturday, 18th August, at 3.00pm.

Pre-match withdrawals due to injury were: Matt Evans, Aaron Gray, Jack A Williams.

In the Ron Massey Cup curtain-raiser played at Henson Park on Saturday, Glebe-Burwood RLFC (aka Glebe Dirty Reds) drew with Cabramatta 28-all.

Here are all the scores from the ISP NSW 21st Round as well as the updated competition table:  http://live.nswrl.com.au/comp/413e134259bc4ebcf

And here are the interviews that were conducted by Alby Talarico from Steele Sports at the Newtown-Penrith match on 28th July:

The Newtown Jets have a bye in the ISP NSW 22nd Round next weekend, 11th/12th August.

Here are the details of Newtown’s next home game: