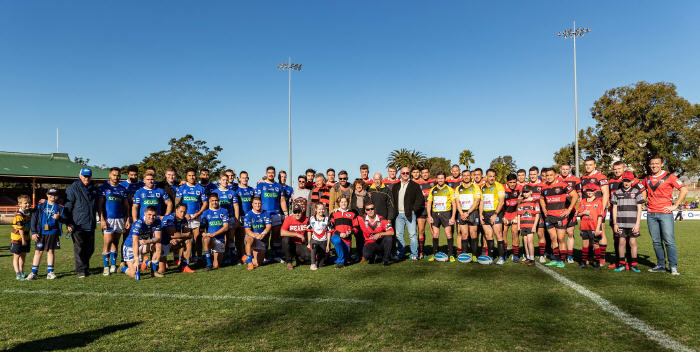 The annual Frank Hyde Shield series contested each year between two of rugby league’s foundation clubs, Newtown and North Sydney, is one of the most significant rivalries in the rugby league game outside of the NRL. The two teams and members of the Hyde family are shown at North Sydney Oval after last year’s fiercely-fought series. Photo: Mario Facchini, mafphotography

The Newtown Jets returned to Wentworth Park in 2018 for the first time in 91 years, and they will be playing there again this Sunday, 17th February, in a pre-season trial match against North Sydney.

There will in fact be three NSW Rugby League pre-season trial games at Wentworth Park on Sunday, at this historic venue which was one of the first grounds used for rugby league in 1908, the year of the code’s foundation.

Sydney University and Ryde-Eastwood will play in a Sydney Shield trial at 1.15pm on Sunday, followed by the Glebe Dirty Reds Ron Massey Cup squad up against the North Sydney Jersey Flegg trial team at 3.00pm. In the main game at 5.00pm, Newtown plays North Sydney in an Intrust Super Premiership trial match. With respect to the Glebe-North Sydney trial match on Sunday, it will be the first time these two clubs have met at Wentworth Park in over ninety years.

Newtown’s demanding pre-season program has been conducted in a particularly hot and humid summer, but head coach Greg Matterson says he and the Jets staff have been impressed with the squad’s thorough application to their training regimen.