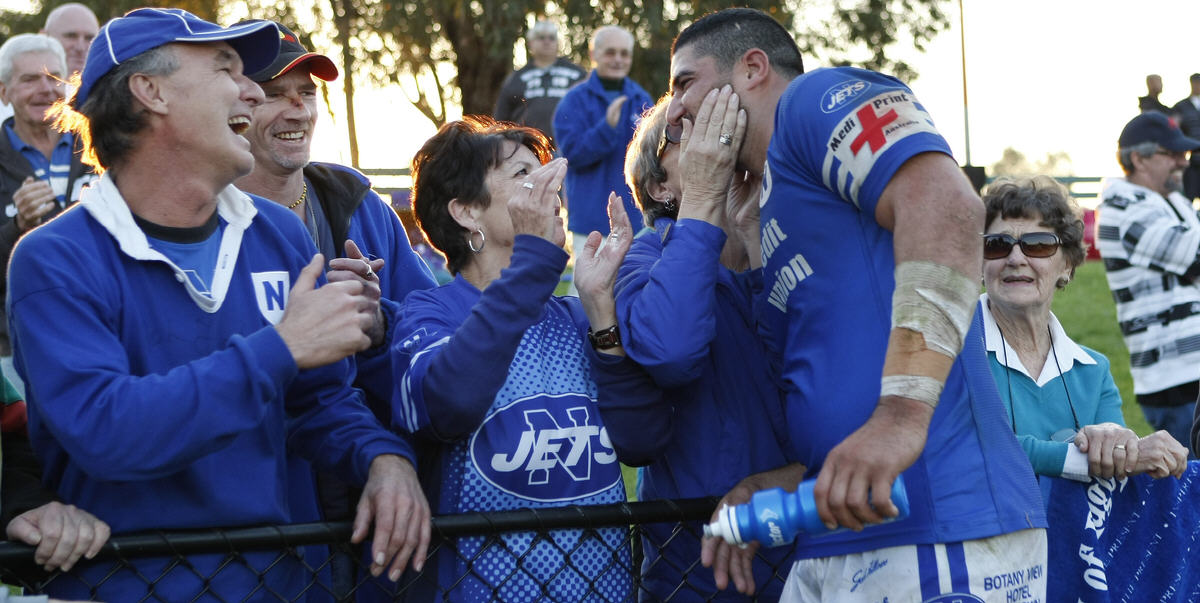 Newtown Jets team captain Khalid Deeb was always popular with Jets supporters because of his wholehearted displays, fearless leadership and accessibility to fans. On this occasion these Jets supporters were ecstatic following the rousing display by the Newtown Jets against a red-hot Canterbury Bulldogs team. Photo: Mike Biboudis.

The Keep The Jets Flying Campaign continues and we sincerely thank everyone who has chosen to contribute to this fund-raising drive to keep our famous old rugby league club alive heading into 2021.

The cancellation of our 2020 season has resulted in a total wipe-out of our main source of income , the revenue from our home games at Henson Park.

One particular Hero of Henson Park (who has asked not to be named) made a very generous donation on top of their Keep The Jets Flying subscription. We express sincere thanks to this big-hearted donor.

We are currently doing everything we can to minimise expenditure and we sincerely thank our loyal sponsors for sticking with us, but now more than ever we need our members, supporters and friends to do the same to help our club survive and ensure we return in 2021! We call upon Newtown supporters everywhere to contribute $100 to become a Keep The Jets Flying member. You will receive a unique package of memorabilia that will last a lifetime, one that will enable you to relive one of the greatest years in our club’s history. You might not be able to watch games this year but you can relive the glory of last season with this package. JOIN HERE.

This week’s members badge draw was won by Edmond D’Albret from Bundaberg in Queensland. Edmond chose as his prizes a copy of the well-reviewed recent club history, Taking It To The Streets – The Second Life of the Newtown RLFC. He also chose a copy of our club’s centenary history, Through Blue Eyes – A Pictorial History of Newtown RLFC. You can buy copies of these books by going to this link:
www.newtownjetsclothing.com.au

The popular Newtown Jets virtual rugby league season continues this Saturday, 25th April, at 3.00pm with the coverage of the Canterbury-Bankstown versus Newtown 11th round NSW Cup match played at the Crest Stadium, Bass Hill. Newtown went into this match with a seriously weakened team, up against the competition leaders who were hell-bent on their third successive NSW Cup premiership title. This game was memorable for the outstanding display by the young second-rower Boyd Cordner, who has advanced to receive a series of our rugby league game’s greatest honours. John Lynch, a Newtown follower for more than sixty years, compared Cordner’s performance in this game to running back-rowers of the class of Dick Huddart, Phil Lowe and Bob McCarthy.

So at 3.00pm this Saturday, 25th April, tune in to JETS TV:  www.newtownjets.com and follow us on: www.twitter.com/newtownrlfc as we revisit this remarkable game against the Canterbury Bulldogs played at The Crest Stadium, Bass Hill back on Saturday, 21st May 2011.
This was Newtown’s team for this match (with the players sponsors in brackets):

Tomorrow, 25th April, is a special day right across Australia when we remember all those gallant men and women who made the ultimate sacrifice for the freedom of our country. Although this year’s circumstances prevent the usual gatherings to honour our Fallen on Anzac Day, we call on Newtown supporters everywhere to honour our returned services personnel. 2020 in fact represents 75 years since the end of World War Two, the war in which our nation faced the greatest danger to its ongoing survival.

The first class rugby league historian, Terry Williams, has written this fine piece on those Newtown Bluebags who served their country in the Second World War

With this year marking the 75th anniversary of the end of the Second World War it’s appropriate this Anzac Day that we acknowledge those Bluebags that served in the armed forces between 1939-45.

The influence of the war on the nation, the game and our club provided major challenges, especially after Pearl Harbour when it came to our very doorstep.

Compulsory military service caused disruption to teams at all levels and impacted on training (even the rudimentary floodlights for evening training could not be used for fear they would provide an enemy target), preparation and combination.

More than 30 Newtown players from various eras served during the war, and some of their individual stories provide an insight into the impact of the war.

Bill Buckley, who had finished as a player but was a rising official in the club’s administration, served with distinction at Tobruk and in the North African campaign. He was a regular correspondent to his footy mates back home and knew the importance of sustaining those links for those who were in the front line. It’s no surprise that he went on a stellar career after the war as 1948 Kangaroo tour manager and then President of the NSWRL from 1961 until his death in 1973.

Bill Ryan, along with brother Bruce, had been glamour recruits for Newtown in 1941 and justified the high rating when he posted eleven tries in 12 matches in his debut season and represented City and NSW.

But with war close to home he enlisted and was given the rank of Lieutenant in the 55th/53rd Battalion, despite only being 23 years of age. His courageous leadership in battle brought about his end as the Anzacs tried to stem the Japanese advance in New Guinea in December 1942, as this graphic eyewitness account reveals:

Private G Shaw said: “Bill Ryan was as great a hero as New Guinea will ever know. Lieut. Ryan jumped out 30 yards ahead of us and called us to follow on. When one of our Bren men was knocked, Ryan threw down his rifle and took the Bren. Then he charged with the Bren shooting up the Jap machine gun posts.

Our men were getting knocked badly but Ryan kept charging ahead and calling us to follow. Side-stepping past Jap snipers and machine gun posts in real Rugby style Ryan killed Japs as he went and used up all his ammunition.

He seized an Owen gun and wiped out more Japs. When he jumped at some Japs in a pit, the Japs, taken by surprise, started to tear out the other end. After killing two of them, Ryan started in pursuit of the others. But as he pounced on a fleeing Jap, a sniper, perched high in a tree, tore a hole in his back.”

Jim Kelly, who had hooked for the Bluebags in 1938 and ‘39 alongside Bumper Farrell in the front row was with the Australian Army Service Corps in Malaya when the Japanese advanced, and though not a front line soldier he was pressed into duty and captured in 1942, spending the rest of the war as a prisoner before he came home in late 1945.

Arthur Kell, who had been the Bluebags reserve grade halfback in 1938, enjoyed a stellar career in the RAAF even though it is unlikely he had even been in a plane before he enlisted. He rose to become a distinguished fighter pilot involved in some of the most daring and famous Allied raids of the war and was something of a celebrity, even being introduced to the crowd at Madison Square Garden in New York by heavyweight boxing champ Joe Louis.

If we had space we could cover some of the other great names from the club who did their bit including Len Smith, who was also a Lieutenant in the AIF, wonder winger Athol Stewart and Herb Narvo who was a fitness instructor in the RAAF.

And we could ponder what might have been had Smith and Narvo been available for the 1944 Grand Final when we lost narrowly to Balmain, but military service came first and no-one was in a position to argue.

Either way, this 25th April we should pay our respects to all of them.