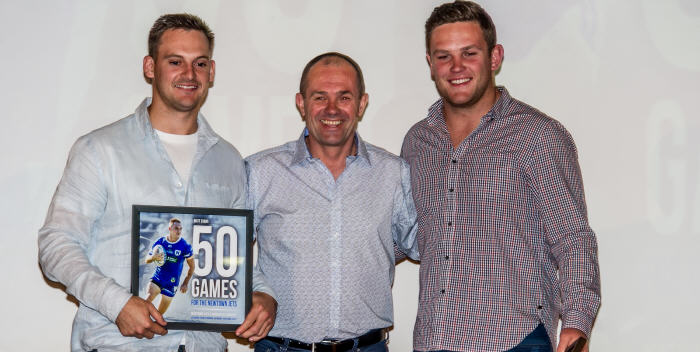 Two of Newtown’s best-performed players in the 2017 rugby league season were worthy winners of multiple awards at the Jets annual presentation dinner, held at the Petersham RSL Club on Tuesday, 26th September.

Kurt Dillon won the blue riband award of the night, the Brian “Chicka” Moore Shield and best and fairest award for 2017. Dillon had a magnificent season and was also chosen in the NSW Rugby League’s Intrust Super Premiership NSW team of the year, no mean feat from a club that finished well out of finals contention. He also reached his 50 games with the club this year after first joining Newtown in 2015.

Kurt Kara won the prestigious Fred Daly Memorial Shield for his outstanding play and selfless leadership during the 2017 season. Kara also reached the benchmark of having played 150 games with the club since joining Newtown in 2011. He also won the Newtown RLFC members’ player of the year award.

Matt Evans won the best back award for 2017 and he reached the total of 50 games with the club during 2017.

Giant front-rower Saulala Houma played his 100th game with Newtown this year after joining the club in 2012.

Other award winners were:

During the function a club spokesman made it clear that the Newtown RLFC will be playing in the NSWRL Intrust Super Premiership NSW competition in 2018. Negotiations with an NRL partnership club are close to being finalised, and the Newtown club will be issuing a further statement on this issue in the near future.