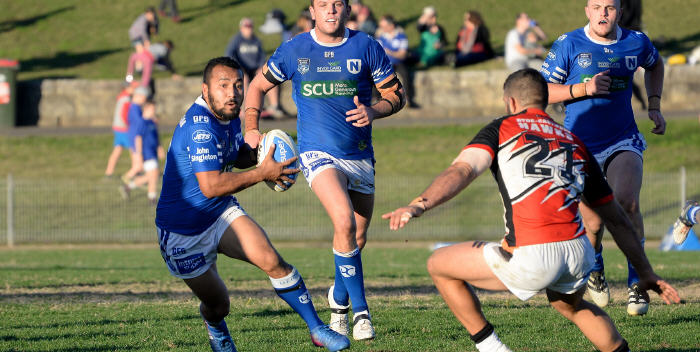 The fortunes of the Newtown Jets took a turn for the worse at Henson Park last Saturday. The Jets lost 18-12 to Wests Tigers in their 16th round Intrust Super Premiership rugby league match, after the scores had been tied 6-all at halftime. This loss now puts the Jets in 11th place on the competition table.

Newtown lost their young five-eighth Luke Jurd prior to the kick-off when he was injured in the team’s pre-match warm-up session. Jurd would have been on debut for the Jets from the high-flying Cronulla Sharks Holden Cup squad.

Bad luck struck again straight after halftime when fullback Matt Evans, who has been in career-best form this season, suffered an arm injury and was finished for the day. In addition, giant forward Saulala Houma had a leg injury that restricted his time on the field.

Newtown took the lead in the 53rd minute when impressive young centre Bessie Aufaga-Toomaga scored in the south-western corner. Aufaga-Toomaga was also on debut for the Jets from the top of the table Sharks Holden Cup team.

The Jets were brought undone by a poor final twenty minutes when they made a lot of errors, had a poor completion rate and went desperately close to scoring on two occasions. Coach Greg Matterson summed up the tone of the afternoon when he observed that there had been no lack of effort and courage by his players, but repeated errors in the last twenty minutes and missed chances contributed to this narrow defeat.

Newtown’s best players on the day were front-rowers Kurt Dillon and Jeremy Latimore, fullback Matt Evans and centre Bessie Aufaga-Toomaga. The Newtown club said farewell to Henson Park crowd favourite Daniel Mortimer, who was in the crowd on Saturday prior to his departure this week to join the English Super League club Leigh.

The Jets next match is on Saturday, 1st July, when they play Wyong at the Central Coast Stadium at 12.40pm. This match is to be televised live on Fox Sports.