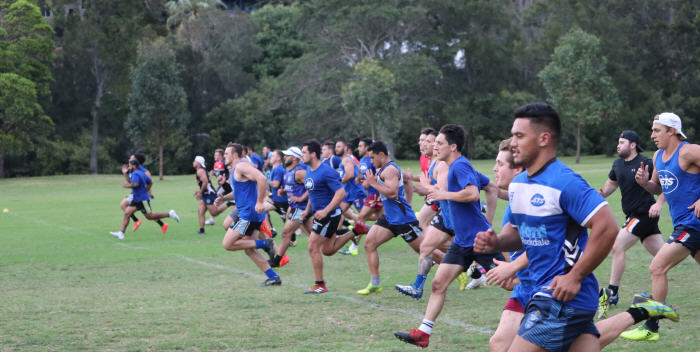 It’s a long way to the top if you want to be … a Newtown Jet. The Newtown Jets go through their paces in a tough December pre-season training session at Mahoney Reserve, South Marrickville. Photo: Wayne Leong.

The Newtown Jets are likely to be seen live on television more frequently in 2018, in line with a press release from the NSW Rugby League yesterday.

The NSWRL announced that: “ The NSWRL’s premier competition, the Intrust Super Premiership NSW, will be broadcast live on Channel Nine in 2018 for the first time, in addition to increased coverage from FOX SPORTS, making it the most watched in the event’s history. While full details of the draw are yet to be finalised, all 24 rounds of the regular season will feature in a 1.00pm Saturday live slot on the Nine Network, in addition to up to two games live each week on FOX SPORTS’ dedicated Rugby League channel, FOX LEAGUE, on Foxtel.”

The NSWRL has also released the draw for the 2018 ISP NSW competition, which can be accessed on this link:  https://www.nswrl.com.au/siteassets/documents/2018-intrust-super-premiership-nsw-draw.pdf

The Jets will have their last training session prior to Xmas on Thursday, 21st December and they will resume on Monday, 8th January. Strength and conditioning coach Graham Morris put the squad through a searching workout in near-equatorial conditions at Carss Park last Saturday morning.

The Newtown RLFC is pleased to send congratulations to new grandparents Greg and Kerry Matterson on the birth of their baby grandson Carter.

One of our favourite ex-players Daniel Mortimer was photographed with his wife recently in Matt Astill’s popular Australian Bar in mid-town Manhattan. Matt is also a former Jet who played with Newtown in 1998 and 1999.

The Newtown RLFC office (located at 14 Rich Street, Marrickville) will reopen on Monday, 8th January 2018, which coincidentally is the 110th anniversary of the foundation date of the Newtown RLFC.

And just confirming that the NSWRL has ratified the rugby league partnership between the Newtown RLFC (ISP NSW) and the Glebe-Burwood RLFC (Ron Massey Cup).

A media story to watch out for: The Daily Telegraph will be running an article and photos on the return of the Glebe Dirty Reds and Newtown to Wentworth Park in the next few days.

The Directors of the Newtown RLFC hit the heights when they held a recent Board meeting at the beautifully-appointed corporate premises of one of the Jets sponsoring organisations, Coverforce Insurance Brokers, located at Level 26, Tower One, International Towers Sydney, Barangaroo. The Coverforce offices have magnificent views of the western side of the harbour looking over Darling Harbour, the Balmain peninsula and northwards. The club extends thanks to Coverforce for this generous invitation. As we always say, nothing’s too good for the Newtown Jets!

Two new signings for the Jets, Jesse and Ben Marschke, are twins who previously played with the Sydney Roosters Holden Cup team. The boys originally hail from Bundaberg up in Queensland’s Wide Bay-Burnett region. They both come with strong endorsements from the Roosters and they’ve been very impressive at pre-season training. Both can play at halfback or hooker and Jesse is a goal-kicker as well. Our Roosters “insider” tells us that both boys are good with the ball and they defend well.