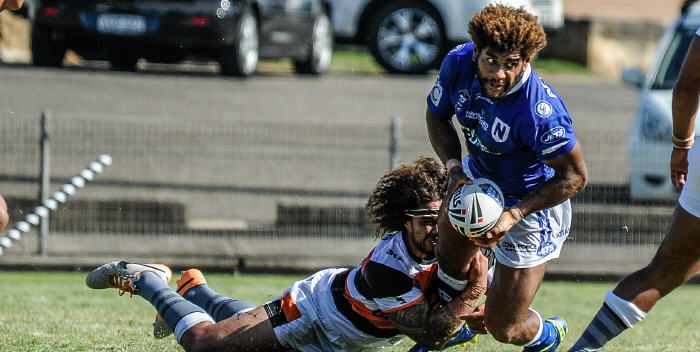 The Fijian Rugby League international and Newtown Jets second-rower Junior Roqica looks to get his pass away against Wests Tigers at Henson Park on Saturday. Photo: Gary Sutherland Photography

No joy for the Jets in NSW Cup opening round

The Newtown Jets lost their first NSW Cup competition match as partners with the Cronulla-Sutherland Sharks. The Jets went down 24-14 to Wests Tigers at Henson Park on Saturday afternoon, after having trailed 18-10 at halftime. The talented utility back Kyle Stanley suffered another serious knee injury which provided further bad news for the new Jets-Sharks alliance.

Newtown’s first half performance was marred by a lack of discipline and a spate of penalties that gave Wests Tigers territory and the opportunity to put pressure on the Jets at their end of the field. All four of Wests Tigers first half tries came through Newtown players conceding penalties or turning over possession. The Jets proved they could break the Tigers defensive line when they gained some possession and held onto the ball, with second-rower Junior Roqica (8th minute) and centre Sami Sauiluma (37th minute) scoring tries from well-executed passing movements.

Jets coach Greg Matterson sent his players back onto the field for the second half with these instructions – they needed to improve their defensive effort, impose more authority in their tackles , get to their kicks and put more pressure on the Tigers playmakers and kickers.

The second half was a hard-fought struggle and the game was there for Newtown to win. The Jets had a bigger share of possession in the second half but at this early stage of the season didn’t quite gel as a combination. Fullback Nathan Gardner was tackled just short of the line in the 53rd minute and winger Blake Judd scored in the 56th, courtesy of a superbly-delivered pass from the former Brisbane Norths halfback Todd Murphy. The Jets looked to be about to go in for the kill with the tiring Tigers hanging on to an 18-14 lead, but they couldn’t quite apply the finishing touches. Wests Tigers broke away to score four minutes from fulltime to seal the result.

Wests Tigers dominance of possession in the first half played a significant role in this result. The Tigers had an 83 per cent completion rate for the match but Newtown’s handling and discipline were much improved in the second half. As coach Matterson noted after fulltime, “our boys certainly fought back into this game in the second half but weren’t sufficiently on their game to claim the result”. This Newtown team was playing together for the first time and there will be better days ahead. Kyle Stanley’s injury was a serious blow to the player stocks of both the Jets and Sharks.

The Newtown Jets travel away next Saturday (14th March) to play the 2014 Grand Finalists, the Newcastle Knights. This second round match is to be played at the Kurri Kurri Rugby League ground (Allworth Street, Kurri) and kicks off at 3.00pm.