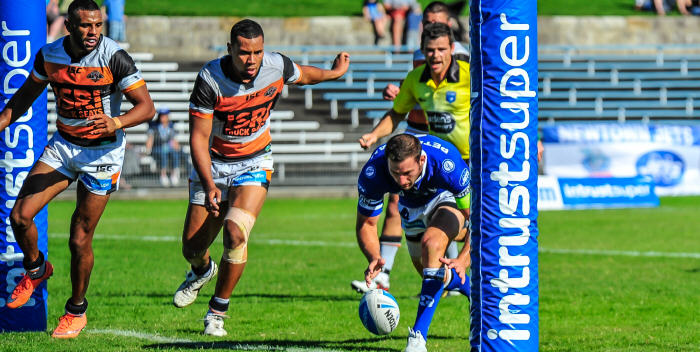 Rampant Jets make it a Hipsters Day to remember

Details of the ISP NSW 5th round match between Newtown and Wests Tigers, played at Henson Park on Saturday, 2nd April 2016 by Glen ‘Bumper’ Dwyer.

Game timeline:
This timeline can be cross-referenced to\ www.twitter.com/newtownrlfc

First-Half:
Wests tigers kick off towards the northern end of Henson Park.
Jets turned the ball over in the first set.

6th minute: penalty to Wests Tigers 40 metres out from their own try-line

14th minute: WT kick-off knocked on by Jets 15th minute: Uncommitted defence by Newtown, WT score wide out on the northern hill side Chance Peni is the scorer, not converted. WT 10-4 after 16 mins

19th min: Newtown turns the ball over, their third handling error 21st min: WT go close again with a controlled grubber-kick into the in-goal Penalty to Newtown relieves the situation

26th minute: Penalty to Newtown, Wt interference in the ruck

29th min: WT tackled behind their own try-line Newtown ball-carriers had been held up over the WT try-line twice.

34th min: WT knock on Josh Cleeland’s angled kick towards the try-line, Newtown scrum feed Newtown then loses the ball in the next set.

At the break Jets coach Greg Matterson praised Jason Schirnack for the considerable impact he made when he came on from the bench. Matterson challenged his players not to allow the opposition to make a second-half comeback as in the previous three weeks.

One player roared out to his team-mates:
“We’ve our foot on their throat; don’t let them back into this contest!”
Words to live by in Rugby League football!

Second-Half:
An early penalty to WT.
Matterson sends out a strongly-worded message for his players not to be overly-adventurous with the ball.

58th min: A disciplined set from Newtown, good kick ahead into the in-goal by McIlwrick, giant front-rower David Fifita wins the race to the bouncing ball. Try converted by Jaline Graham. Newtown leads 34-10.

63rd min: Penalty to WT midfield and late in the tackle count, followed by a repeat set to WT

65th min: Some raggedy play by Newtown; ball is lost in the play the ball 30 metres out from their own line

68th min: superb cut-out pass by Josh Cleeland to Jacob Gagan, who scores a determined try in the corner Try not converted, Newtown leads 38-10 with 11 mins to play

Greg Matterson comments after the game that he was very pleased with this performance. There is still plenty of room for improvement and you don’t make the finals in early April. There’s plenty of hard work ahead but today’s performance provides an excellent benchmark.
It certainly was one of Newtown’s best wins at Henson Park in recent years.

It was also one of the biggest attendances recorded at Henson Park for this level of competition at this early stage of the season.

The bigger attendances in the past have been for mid-season block-busters (Newtown v North Sydney, 2008) and for several final round Reunion Day matches.

And this image truly is one for the ages:  https://www.instagram.com/p/BDrcIqJpAaa/

And Mario Facchini was on the job as well:  http://mafphotography.blogspot.com.au/2016/04/intrust-super-premiership-2016-round-5.html?m=1

Please note that the details for Newtown’s next ISP NSW match have changed: