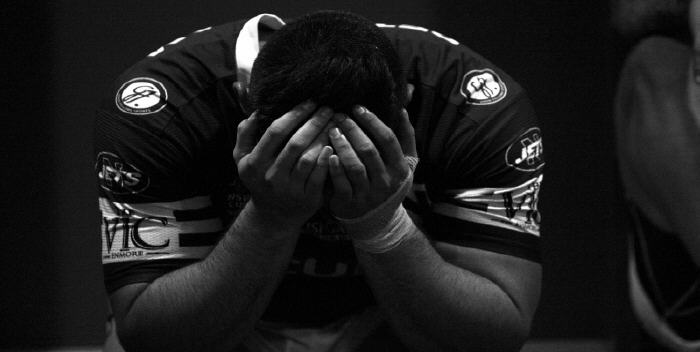 The Newtown Jets have bowed out of their quest for a place in the 2014 NSW Cup finals. The Jets lost 26-24 to the Newcastle Knights at Hunter Stadium on Saturday, but staged a thrilling late rally after having trailed 26-8 with less than ten minutes left to play. Even if the Jets had managed to pull off another last-gasp victory, the results of other final round NSW Cup matches did not break Newtown’s way.

The Jets opened the scoring in this tense contest that was played in overcast conditions, with light rain falling and a strong southerly blowing. Halfback Scott Dureau and backrower Rhyse Martin combined cleverly to send centre Matt Evans over in the right side southern corner.

Nathan Stapleton, who had turned on a faultless goal-kicking display for the TV cameras some weeks, before found the blustery southerly a difficult taskmaster. The Jets missed a scoring chance in the 16th minute when Rhyse Martin had a try disallowed for what was ruled a forward pass.

The Knights took advantage of a Newtown midfield knock-on and scored in the 26th minute although there was some doubt about the final pass in this movement. Newcastle had a player dismissed in the 30th minute and Newtown scored in the following set, with Arana Taumata batting the ball on skilfully to Junior Vaivai who scored in the left-side corner. Once again Stapleton found the wind a contrary adversary. Jets backrower Jack Siejka missed another scoring chance when the ball was knocked from his grasp two minutes before half-time. The Jets went in at the break (after running into the wind) leading by 8-6.

The second half was a frustrating mixture of missed scoring opportunities for the Jets plus handling errors and pushed passes that gave the Knights possession and good field position. Newcastle scored early in the second half after the Jets had turned over the ball. Saulala Houma went desperately close to scoring for Newtown in the 15th minute of the second half, and the Knights scored another break-away try against the trend of play in which there was a somewhat dubious pass involved.

The Knights added a penalty goal in the 63rd minute to extend their lead to 20-8. When the Novocastrians scored again after gaining possession from a Jets error, the Knights had opened up what looked to be an impregnable
26-8 lead.

The former Knight Scott Dureau snapped up an intercept seven minutes out from fulltime and ran 85 metres to score, quickly converting his own try for good measure. Two minutes later outside backs Jonathon Reuben and Junior Vaivai combined at high speed for Vaivai to score, with Dureau converting from wide out. With three minutes on the clock Dureau sent a long kick downfield that bounced wickedly in the Knights in-goal and Jonathon Reuben won the race to the ball. Dureau’s conversion attempt was wide and Newtown trailed 26-24.

With one minute remaining the Jets had an opportunity to kick a penalty goal from close range but opted to go for the try, as one point from a draw would not have kept Newtown in the finals chase.

Thus ended Newtown’s dramatic 2014 season, a perplexing mixture of exciting victories against all of the top-ranked sides except for Newcastle, and disappointing losses to teams below the Jets on the competition table. Coach Greg Matterson thanked his assistant coaches, all the team staff and all the players for their wholehearted efforts and commitment throughout the season. Newtown’s exit marks the end of a productive and memorable nine-year Rugby League partnership with the Sydney Roosters club, and now a new era in the oldest club’s history begins.