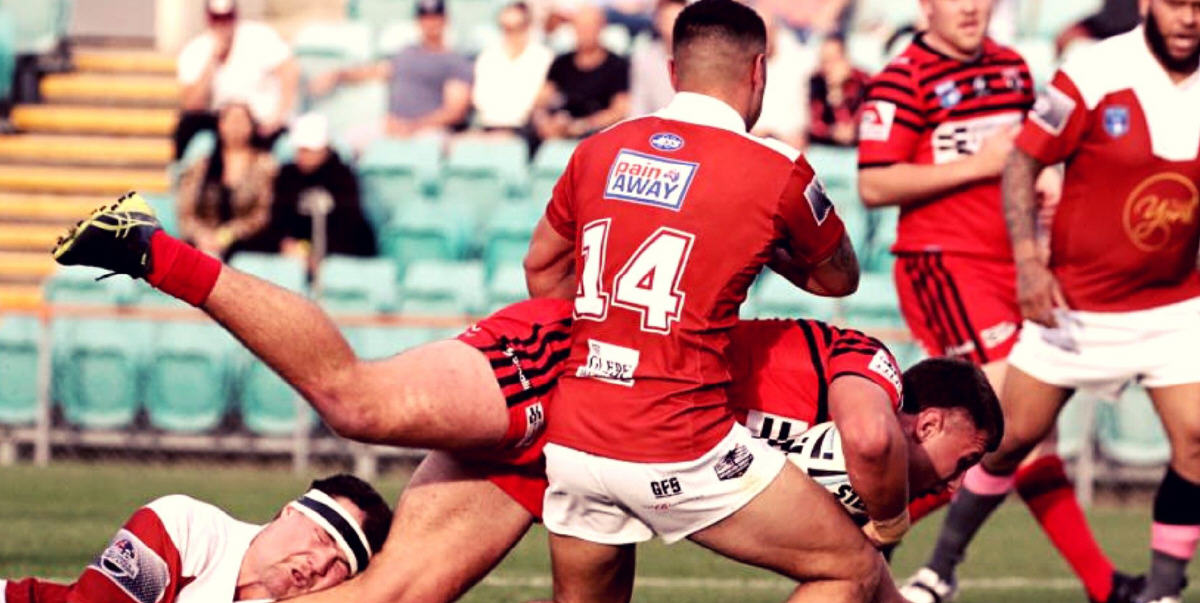 Glebe and North Sydney met in the NSWRL First Grade Final at the SCG on the 6th September 1922. The Shoremen (as North Sydney were then known) raced away to a 35-3 victory. The team captains back then were two of the greatest names in the history of rugby league football – Frank Burge (Glebe) and Duncan Thompson (North Sydney).

In Saturday’s match at atmospheric Leichhardt Oval, the Glebe Dirty Reds scored three tries in the last thirteen minutes to record a solid 26-6 victory over the North Sydney Bears.

Both teams survived plenty of attacking raids from their opposition in the early exchanges.

Powerhouse Glebe centre Addison Demetriou was close to scoring and offloaded to Matt Stimson who lost the ball over the line.

Minutes later, Glebe forced a drop out and had another chance to score but Norths prop Elia Faatui caught the ball on the fly off a grubber kick and got his team out of trouble.

The Bears were awarded a penalty on Glebe’s line with eight minutes left to play in the first half and half Tobias Westcott kicked the goal to break the stalemate and lead 2-0.

Just a few minutes later, Glebe were down the other end and looking dangerous and their five-eighth Sitiveni Moceidreke took advantage of an overlap on the right hand side of the field and crashed over to break the try-scoring drought.

Demetriou’s conversion looked to be going over but it cannoned away off the right-hand upright, so Glebe remained just two points ahead at 4-2.

Two minutes out from the half time break the Bears had good field position and were awarded a penalty right on the Dirty Reds line with Westcott kicking the penalty goal to tie up the game heading into the sheds.

“We just had to go out there and keep competing,” Glebe skipper Jackson Garlick said.

“The repeat sets eventually wore the Bears down – I think we got three in the first half and we were determined to keep on going in the second half – it was all about game management and field position and playing at their end of the field.”

Moceidreke put in a grubber and Jonah Ngarono was after it but the Bears forced it dead so the Dirty Reds got another chance.

Twelve minutes into the second half and off the back of a penalty Glebe decided to shoot for goal and Demetriou was successful putting the Dirty Reds in front by 6-4.

Ngarono chased a kick hard and looked certain to score but in a huge defensive effort North Sydney winger Michael Pearsall held him up as he was going over the line to deny the try.

In the ensuing set Glebe were awarded another penalty and tried to go for the four points, but Pearsall again came up with another try-saver off a kick that was rolling along the ground.

It was a Bears dropout and once again their defence stood up as big man Dwayne Mariner went over the posts but was held up by four Norths defenders.

Up the other end of the field the Bears were awarded a penalty and Westcott kicked it to tie up the scores at 6-all.

With only 13 minutes left to play, Glebe were on the receiving end of another penalty and capitalised from close range, with Trent Toelau barging over the line to score.

Demetriou’s kick was successful and took the Inner-West men out to a 12-6 lead.

The Dirty Reds then got on a roll and in the next set Demetriou broke away down the far touch line and offloaded to second rower Matt Stimson who went over for the match sealer, with Demetriou converting for Glebe to lead 18-6.

With six minutes left to play the Dirty Reds  kept up the intensity and took advantage of some tired Bears players off a kick along the ground which Liam Coleman grabbed onto and slid along the white stripe to score. Demetriou added the extras and now the score was 24-6.

With less than two minutes left to play Demetriou kicked another penalty goal to extend the Dirty Reds lead by two more points.

“We knew it was going to be tough all week,” Garlick said after the match.

“The last time we played the Bears, they’re a fellow foundation club and we beat them 16-12 in the second round. We knew they were going to come out firing today.

“It was extremely tough for the better part of 70 minutes and the score only blew out in the last ten minutes.

“It was end to end grinding stuff and I’ve never seen so many penalty goals kicked in a game of rugby league. We thought this might be 6-all at the end of the game and we were thinking about a drop goal, but we cracked them open at the end and I think the repeat sets really wore the Bears down.”

In the other grand final qualifying match played on Saturday at the Maitland Sports Ground, the Maitland Pickers 16 defeated the Hills District Bulls 14.

Information about tickets sales for next Sunday at Bankwest Stadium:
https://www.nswrl.com.au/news/2020/09/20/tickets-on-sale-for-nswrl-grand-final-gala-day/

(Thanks to Sam Pasfield and the NSWRL for the match report).