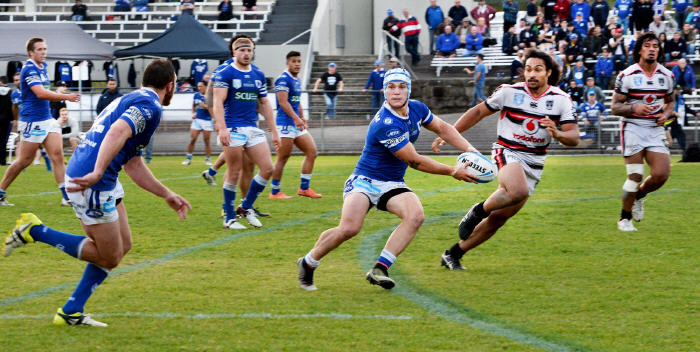 Newtown five-eighth Josh Cleeland is pictured about to fire out a pass when the Jets and the New Zealand Warriors last met at Henson Park back on the 18th June. The Jets defeated the then-competition leaders 38-6 that day and no doubt all Newtown supporters will be hoping for a repeat performance out at Penrith on Sunday evening. Photo: Michael Magee

The teams who finished 4th and 5th on this year’s Intrust Super Premiership NSW final competition table will meet in a sudden-death semi-final on Sunday. The Jets were beaten 30-12 by the minor premiers Mounties in a qualifying final last Saturday, and the Warriors saw off Penrith 21-14 in an elimination final at Mt Smart Stadium, Auckland last Sunday.

This Newtown-Warriors match is being televised live on Fox Sports One on Sunday from 6.30pm, and it is also being broadcast live by the Steele Sports team on www.steelesports.com.au

Newtown’s team for Sunday evening is:

And the New Zealand Warriors team is:

This excellent article on Newtown Jets winger (and the club’s leading try-scorer for 2016) Jacob Gagan is from the NSWRL website:  http://www.nswrl.com.au/news/2016/09/08/fresh_faces_going_pl.html

Courtesy of the NSWRL, here are the highlights from Saturday’s qualifying final:  http://www.nswrl.com.au/news/2016/09/08/highlights_intrust_s.html

How the Cooks River Valley Times covered last Saturday’s Jets-Mounties match on pages 19 and 20 of this week’s issue:  http://bit.ly/2cGB2BF

How the NSWRL has previewed this Sunday evening’s match between the Jets and the Warriors:  http://www.nswrl.com.au/news/2016/09/07/preview_newtown_v_nz.html

Alofa Alofa is well remembered as Newtown’s dashing fullback in our 2012 NSWRL NSW Cup premiership-winning team. Alofa switched to Rugby Union in 2013 and represented the NSW Waratahs and his homeland Samoa, and then moved into the French Top 14 Rugby Union competition. He has just signed a new deal with the Harlequins Rugby Union club in London.

The annual Dulwich Hill Fair is on this Sunday, 11th September from 10.00am to 4.00pm in the Dulwich Hill Village Centre in Marrickville Road. The Newtown Jets clothing and merchandise marquee will be there open for business. If you’re going to this very popular inner-western community event, call in and say hello at the Jets marquee and make a selection from the great range of merchandise on sale.