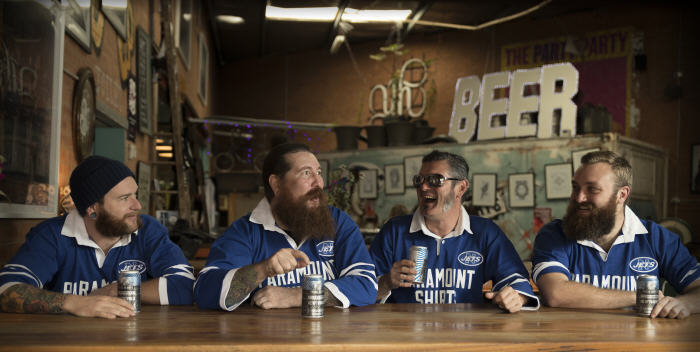 One of the best promotional shots of 2017 – the boys from Young Henrys wearing their Newtown Jets classic jerseys and enjoying a convivial Newtowner Pale Ale. Photo: MAF Photography

The Jets and the Sharks come to terms for 2018

The Newtown Jets and Cronulla-Sutherland Sharks have reached agreement for a new rugby league partnership in 2018.

The Jets will be playing again in the NSWRL Intrust Super Premiership competition, and will be reinforced on a weekly basis by Cronulla NRL squad members who have not been selected in that week’s Sharks NRL team.

The Newtown and Cronulla-Sutherland clubs issued this joint press statement on Monday afternoon.

“In a positive for both organisations the Sharks and Newtown Jets can announce a continuation of their partnership into the 2018 season.

The Sharks and Newtown Jets, a NSWRL foundation club with a history dating back to 1908, came together in 2015, were partner clubs during Cronulla’s premiership winning season of 2016 and have extended their association into a fourth year.

As per the partnership arrangement that was in place over the past three years, the Sharks will provide contracted players not selected in the NRL team to the Newtown club for matches throughout the season.

The Sharks were pleased to be continuing with the Jets and were looking forward to a successful 2018 for both clubs.

“The Jets are an outstanding club with great tradition and we are proud to be partnering them again next season,” Sharks Head of Football Operations Phil Moss said. “Newtown is a club where we know our players when sent there to play are not only going to be looked after, but they are also going to be able to continue their development with the goal of becoming regular NRL players.”

Newtown Jets General Manager, Stuart McCarthy, said: “We are delighted to continue our relationship with the Cronulla Sharks for 2018. The partnership has worked well to date with Cronulla winning their maiden NRL premiership in 2016.

“It remains the goal of the Jets to continue to provide a positive environment to develop players coming through the system, so that they are ready to contribute to Cronulla’s NRL team when the opportunity arises, whilst at the same time bolstering Newtown’s playing ranks and chances of success in the Intrust Super Premiership NSW.”

While a draw has yet to be released by the NSWRL it can be expected that the Jets will play Intrust Super Premiership NSW matches at their traditional home ground of Henson Park.

The partnership extension is for one season.