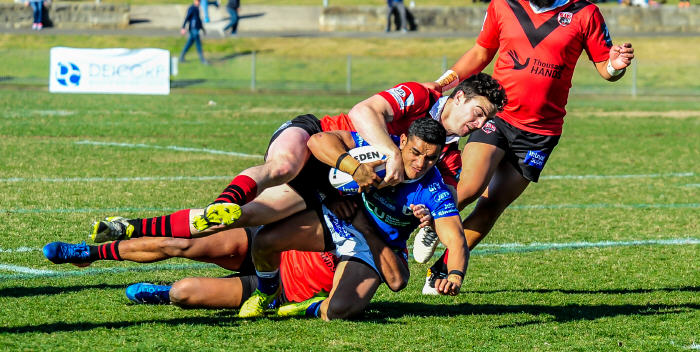 Young winger Tyla Tamou turned in several impressive performances in the latter rounds of the 2017 season, and will be playing with Newtown again next year. Photo: Gary Sutherland Photography

The Newtown Jets will be 110 years old in 2018, and they are in the process of forming an alliance with another club that was there in rugby league’s foundation year back in 1908. The Glebe Dirty Reds went out of existence in late 1929, but the club made an amazing comeback to the rugby league playing ranks earlier this year.

In recent years the Jets have sent their spare Intrust Super Premiership players to the Cabramatta club in the third-tier Ron Massey Cup competition. Subject to receiving final approval from the NSW Rugby League, the Jets plan to form a similar partnership with the Glebe-Burwood RLFC which also plays in the Ron Massey Cup.

Newtown’s general manager Stuart McCarthy points to the remarkable synergy between the two clubs, with both Newtown and Glebe forming in early 1908 and the two clubs having a wealth of folklore from rugby league’s early years. Glebe-Burwood chairman Darren Flynn is also enthusiastic about the retro alliance and says it has already energised his club. Glebe-Burwood made the Ron Massey Cup semi-finals in 2017 and they are convinced that being partnered with Newtown will be a positive factor for their club.

The Newtown Jets get their pre-season program underway on Monday, 13th November. The Jets have been busy in the recruitment market and will make some player acquisition announcements soon. Newtown and the Cronulla Sharks both recently announced that they have entered into another partnership arrangement for the 2018 season.