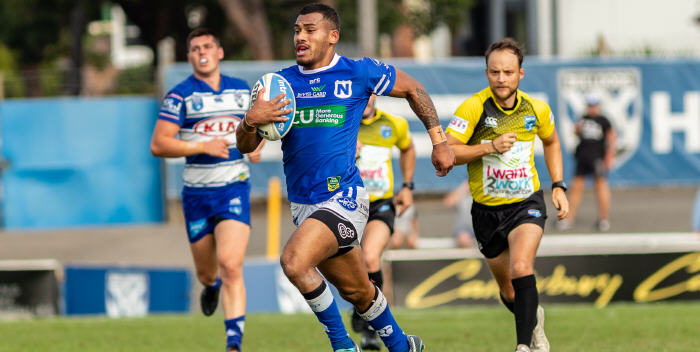 The Newtown Jets travel to Auckland this weekend for their annual away match to the New Zealand Warriors. The Jets won a thriller against the Canterbury Bulldogs last Saturday in a match that was covered live by Channel 9. The Warriors had a strong 37-24 win against St George-Illawarra and will be looking to make the most of their home city advantage. The Warriors and the Jets are both on eight competition points and they have both won four games and lost three. They are only separated by their respective points for and against tallies.

This match is to be played at a venue rarely used for rugby league – QBE Stadium (formerly known as North Harbour Stadium), located in Albany on the northern side of Auckland:

Sosaia Feki makes his debut for Newtown after coming back from injury. He was a member of the Cronulla Sharks 2016 NRL premiership winning team and was the Sharks leading try-scorer in 2017:

Malakai Houma makes a popular return to the Newtown Jets ISP NSW squad after suffering a serious leg injury early in the 2017 season. Welcome back Malakai!

Ben Marschke has won selection in the Jets ISP NSW squad this weekend. He has previously played with the Sydney Roosters NYC team.

On Saturday 5th May at 1.00pm, the Wide World of Sports team will descend on Henson Park to broadcast our Intrust Super Premiership NSW match v North Sydney Bears.

It is the first free to air TV game at Henson Park since 1987 and the first featuring the Newtown Jets since 1982.

Make sure that you, your family and friends all get to Henson Park on Saturday, 5th May to be part of this historic event:

Please take note that this Jets-Bears match on Saturday, 5th May will commence at 1.00pm.

There was no winning entry to the last Newtown Jets quiz, although several people went close.

The questions were – name Newtown’s biggest ever win in a rugby league competition game in any grade since 1908, what competition the win was achieved in, and who was the opposing team?

The answers were: Newtown defeated St Marys 78-12 in the 13th round of the 1996 NSWRL Metropolitan Cup first grade competition. The match was played at the Kingsway Oval, St Marys. The Jets scored 14 tries and kicked 11 goals.