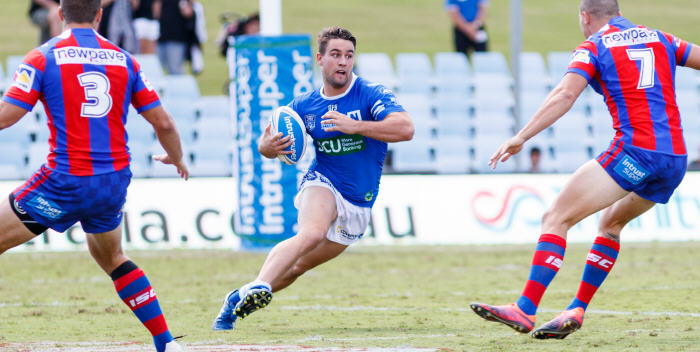 Newtown Jets second rower Jayden Walker, a product of the Cronulla Sharks junior system, has been in consistently good form this year. Jayden is the son of Shane Walker, the tough front-rower who played with St George, Eastern Suburbs, Balmain, Wests Tigers and Melbourne Storm between 1990 and 2002. Jayden represented Australian Schoolboys in 2014 and is eligible for Italy in the 2017 Rugby League World Cup. Photo: MAF Photography

The Jets travel to Auckland this weekend to take on what appears to be a tough task – coming up against the unbeaten Warriors at Mt Smart, with Newtown going into this match having won two games and lost three. The Jets have a strong team right across the park and are one game closer to really clicking as a formidable playing unit. The mood in the camp this week was upbeat and buoyant and as one player said at training on Thursday night, “tell our supporters to tune in to Fox League 502 at 9.30 this Sunday morning – we all have a very good feeling about this game”.

The weather forecast for Auckland on Sunday is: 20 degrees C, cloudy, possible showers.

Newtown’s team (as of Friday morning) is:

How the NSWRL has previewed the Warriors-Jets match in the ISP NSW – Sixth Round:

After a tough start to the year, the Jets find no respite when heading across to the Mt Smart Stadium to take on the red-hot NZ Warriors.

Though far from convincing in their Round 5 win over the Blacktown Workers Sea Eagles, the Warriors found a way to the front, doing enough to keep intact their unbeaten start to the 2017 season.

Newtown meanwhile fell to an impressive Knights outfit, with the Jets’ goal-line defence sure to have been put to the test mid-week, on the back of some soft efforts nearer their line.

The Jets – poised mid-table as it stands – will have their premiership credentials tested in this one, against a Warriors side intent on extending their winning run to six.