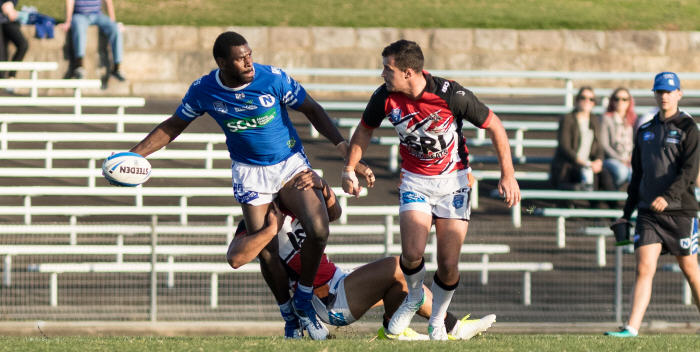 Edrick Lee moves into the centres for this week’s encounter with the Canterbury-Bankstown Bulldogs. Photo: Mario Facchini (MAF Photography)

There’s another must-win assignment this Saturday, this time against the Bulldogs at Belmore

The Jets go into another must-win situation when they take on Canterbury-Bankstown.

Newtown supporters will be hoping that the Jets can retain their form from their last game against the second-placed New Zealand Warriors. Since then the Jets have had their second bye and the Bulldogs beat Wentworthville 30-28. Newtown must win at Belmore tomorrow to stay in the Intrust Super Premiership finals race.

The significant player milestones keep occurring for the Newtown RLFC. Tomorrow at Belmore Sports Ground marks tough front-rower Kurt Dillon’s 50th game for the Newtown Jets. This young fellow is a wonderfully wholehearted player who has old-timers recalling the no-nonsense playing style and extended work-rate of the great Bill Noonan from back in 1979 and 1980. Congratulations Kurt on your 50th game from everyone in the Newtown Jets community!

The Canterbury-Bankstown team is:

Get your tickets for the University of Rugby League Part 2 – The Fourth Estate, being staged at the Petersham RSL Club on Tuesday night, 22nd August: http://bit.ly/2wcY7We