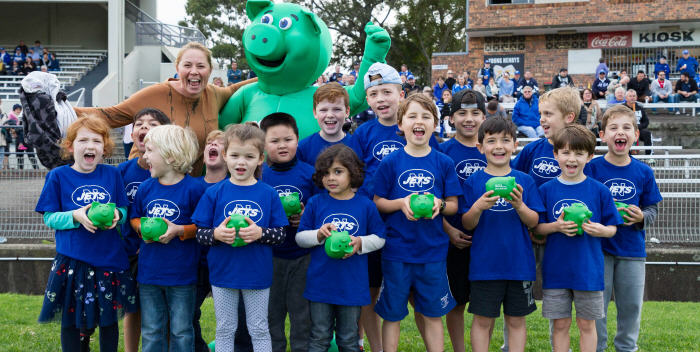 The Newtown Jets might have lost the game, but they made a lot of new friends among these children from St Brigid’s Primary School, Marrickville who were the club’s guests at Henson Park on Saturday. Syd the Pig from SCU – More Generous Banking joined the happy throng for this photo. Photo: Mario Facchini (MAF Photography)

Not too many teams in the Intrust Super Premiership competition would fancy coming up against the Sea Eagles at the present time. The competition newcomers (and Manly-Warringah’s partnership club) have gelled as a team and are really starting to make their presence felt. The Jets were well below full-strength on Saturday but they were still in the game at halftime when they trailed 18-12. The Sea Eagles had the better of the second half and ran out winners by 42-18.

Saulala Houma’s 100th game with the Newtown RLFC was officially celebrated on Saturday.

Details for Newtown’s next game:

Sea Eagles kicked off to the northern end.

2nd min: Try to BWSE next to northern uprights. Soft try from dummy-half.

Joey Lussick was the try-scorer.

12th min: Hastings kick into the in-goal is well weighted and forces Newtown into a goal-line drop-out.

12th min: Filino crashes over in nth-east corner despite attention from Newtown defenders.

Hastings converts from the sideline.

BWSE bomb a try-scoring chance in the nth-west corner in the 15th min.

Jets get a repeat set at Sea Eagles end in the 17th min.

Sea Eagles make big metres up the middle through their huge pack.

BWSE good at jamming up on the Jets inside backs, shutting down ball movement.

Jets score in the next play the ball as Kurt Dillon barges over.

Jets turn over the ball in their own quarter and BWSE score a ridiculously easy try in 28th min (Jamil Hopate).

Luke Towers takes a brave catch right on his own tryline and is heavily dumped (31st min).

Hastings proves he’s human when he kicks out on the full in 33rd min.

Jordan Drew is across the line but is held up (36th min).

BWSE lose the ball in a tackle on the 37th min and the player puts on a display of pronounced petulance.

Jets get their variations working and Saulala Houma scores one of his trademark “Rampaging Rhino” tries to the left of the southern posts.

Penalties have favoured Newtown 6-1 in the first half.

Newtown is running to the northern end.

The floodlights are on for the second half.

Too many of Newtown’s kicks on the last tackle have been ineffectual.

BWSE go close in the next set

Cullen continues to be a real handful.

Hastings puts in another kick in behind the Newtown defensive line which causes more problems.

Cullen and Hastings are quite obviously top-class NRL material playing in the ISP NSW.

78th min: Leigh Higgins shows a lot of determination as he steps his way past several defenders to score under the northern posts