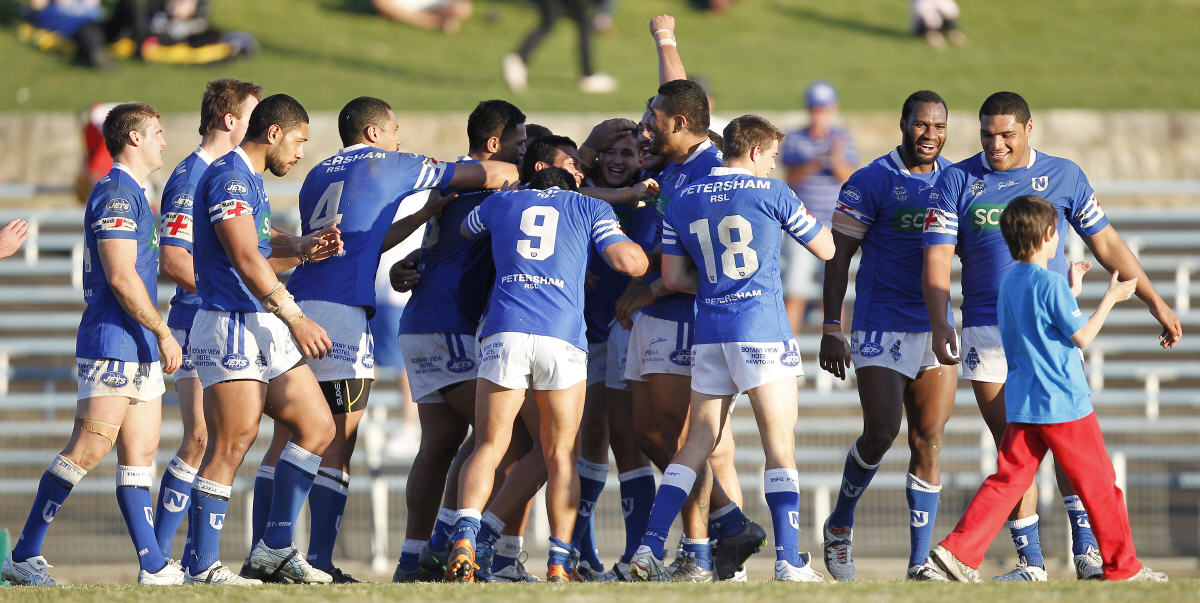 Team mates rushed to Jack Littlejohn to celebrate his successful long range penalty goal after the full-time siren. The win assured the Jets would finish in the top 8. Photo: Mike Biboudis

A special invitation was issued to all former players, staff and officials connected with the 1992 NSWRL Metropolitan Cup first grade premiership team. The team was honoured on the reunion day in view of 2012 being the 20th anniversary of that historic premiership win.

Newtown five-eighth Jack Littlejohn was the toast of the Inner-West when he kicked a long-distance penalty goal after the full-time siren had sounded at Henson Park on Saturday, guaranteeing the Jets a place in the VB NSW Cup semi-finals.

Newtown’s last-gasp 26-25 win over the Illawarra Cutters, St George-Illawarra’s feeder club, was a thrilling spectacle played in front of the season’s biggest crowd.

How the drama played out

The teams had been locked together 6-all at half-time and the Jets looked to be in control when they forged ahead to an 18-6 lead ten minutes into the second half.

The Cutters turned the game around with two quick converted tries and then took the lead 24-18 with fifteen minutes remaining. The Jets’ finals aspirations looked forlorn when Illawarra added a field goal to their points tally with only six minutes left to play.

In an extraordinary finish, the equal of any of the thrillers turned on in the NRL this year, the Jets regained possession from a short kick-off and in the ensuing set, giant prop, Saulala Houma, plunged over to score, with this try being converted by Jack Littlejohn.

A penalty to Newtown on the stroke of full-time gave Littlejohn his chance, albeit with the kick to be taken from about 35 metres out and towards the right-hand touch-line.

His kick never looked like missing and brought forth a prolonged exultant roar from the 3,000-plus annual reunion day crowd.

There have been a number of last-minute victories in the thirteen seasons that the Jets have been playing second-tier Rugby League back at their spiritual home, Henson Park, but this is one game and one supremely-dramatic, high-pressure moment that will be talked about for years to come.

Newtown’s coach Greg Matterson had told his players at half-time that they were playing in what was nothing less than an elimination semi-final.

Had the Jets lost on Saturday, and given that they have the bye in the 26th round, it was most unlikely that events would pan out in Newtown’s favour to ensure a berth in the finals. Matterson told his men that this game would be won by the team that wanted the result most.

As he said in a post-match radio interview, “we dropped off for part of the second half and the Cutters were good enough to take what seemed to be a match-winning lead. We had the fighting spirit to come back from the dead in that last three minutes. We’re in the semis now and that’s all that matters. This year’s NSW Cup is very even and any team can win this competition from anywhere in the finals – and now we’re in there and we’re going to give it a real shake”.

How the Jets scored

The Jets’ try-scorers were front-rower Mose Masoe who barged over early in the game, with Jack Littlejohn kicking the first of his five goals. Second-rower Anthony Cherrington blasted his way across in the right-hand hillside corner early in the second half, and then his second-row partner Jack Bosden seized upon a grubber-kick into the in-goal by Jack Littlejohn that the Cutters were unable to defuse.

Prop Saulala Houma, who has enjoyed a boom second-half of the season, scored a crucial try after centre Peni Tagive had regained a short kick-off after the Cutters had taken a seven-point lead late in the second half.

Jack Littlejohn converted all four of Newtown’s tries and then kicked that nerve-wracking penalty goal from wide out after the full-time siren had sounded.

The Jets coaching staff said it had been a day of mixed playing performances but to come from behind and to win in front of the season’s biggest attendance tended to even up every player’s report card.

The Newtown Jets have a bye next weekend in the 26th round of the competition and will wait to see the outcomes of the weekend’s games. At the completion of the final round the NSW Rugby League will allocate venues and dates for the first weekend of the 2012 finals. Jets supporters can be assured that Newtown officials are lobbying furiously to see if Newtown can be allocated a home semi-final at Henson Park.