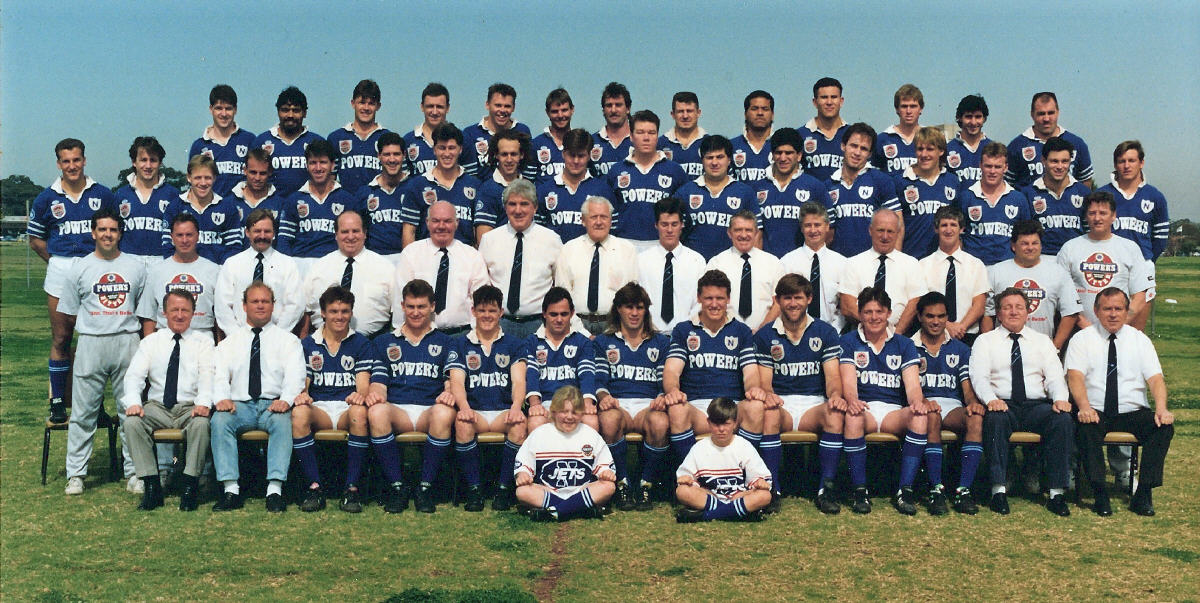 BACK ON TOP – THE 1992 METROPOLITAN CUP GRAND FINAL

Newtown fans had waited a long time for a day like Saturday August 29 1992. Supposedly dead and buried a few years before, the club had made a comeback of biblical proportions to rise again and secure a place in the premiership decider. As minor premiers and club champions the Jets went in as strong favourites, especially after Wentworthville had to survive a replay of the final against Ryde Eastwood on the Tuesday. The Black and Whites were still confident, in spite of their injury toll, of repeating their first round win over the Blues.

The Grand Final was played at Parramatta Stadium in a camival atmosphere .The Newtown Golden Oldies match had whet the appetite of fans, but the memory of disappointment in 1981 prevented any Newtown supporters from getting carried away.

The match started at a furious pace. From the kickoff, Jets’ second rower Terry Dolling charged at the defence and knocked two Wentworthville tacklers out of the way. It was the start of a powerhouse display by the Newtown forwards which laid the platform for a history-making win. Craig Shaw opened the scoring with a penalty goal in the thirteenth minute after Craig George was held down in a tackle a metre from the Wentworthville line. Big Wenty prop Jim Stafford, who played with a cracked jaw, was sent to the sin bin for the offence.

It was the Magpies, however, that had most of the penalties and possession in the opening 20 minutes. Although they created several chances, they were unable to finish them off. The Newtown finishing, on the other hand, was clinical. Good runs by Bal Dhadlie and Tony Catton set up the first try after 18 minutes. With the Wentworthville defence still backpedalling, a long Darryl Neville pass sent Craig George into a gap. His pass found fullback Shaw in support, who in turn passed to Peter Baumgart, and the big centre crashed over out wide.

It was Baumgart who also grabbed the Jets’ second try when he ploughed his way over off a Barry Russell pass after 37 minutes. The try came at the end of three sets of tackles inside the Wenty quarter and gave the side some breathing space right on half-time. But before the break they were in again. A few tackles after the kickoff another Baumgart charge reaped dividends when he off-loaded to Barry Russell. The former Rothmans Medallist showed that he had lost none of his blistering acceleration and elusiveness, and took the ball to within 15 metres of the tryline before lobbing a perfect pass to dancing winger Bal Dhadlie. Shaw’s conversion made it 18-0 at the break.

To make things worse for Wenty, centre Steve Antonelli was sinbinned for an incident in backplay while the try was being scored and they were left a man short for the first 10 minutes of the second half. The lack of discipline from some Wentworthville players was to prove very costly.

All season Newtown coach Brian Wakefield had been had been worried by his team’s tendency to go to sleep early in the second half, and this time it almost cost them the premiership. 13 minutes into the second half a speculative bomb by Craig Steadman bounced loose in the Newtown in-goal and the Magpie five eighth fell on his own kick to open the scoring for his team. Five minutes later the game was open again when Wenty scored their second try. A long run from Antonelli, saw the ball come inside to half Steve Edwards and he crossed under the posts. Steadman’s conversion made it 18-12 and a whole new ball game.

The Bluebags steadied with a penalty goal to Shaw after an indiscretion in the play the ball by Wentworthville ‘s other fiery centre Steve Black. With an eight point margin coach Brian Wakefield was able to breathe a bit easier, but his relief was only temporary. With only 10 minutes left on the clock, Wenty captain Mark Clinton jigged his way into some space and popped a pass to the enterprising Edwards who raced downfield and chipped ahead .The freak bounce eluded Edwards and the Newtown chasers but bounced straight into the hands of Wentworthville lock Darren Seymour and he crossed beside the posts.

At 20-18, and having lost Shane Kelly and Craig Shaw the Bluebags suddenly looked vulnerable. Looking to steal another try Wenty moved the ball wide and looked to have created the gap until Fred Teasdell’s covering tackle jolted the ball loose. Tim Blasczack swooped on the ball and raced up the sideline, beating two cover defenders to score the season’s most important try.

The great pressure conversion from replacement fullback Robert Page guaranteed the Jets win. The icing on the cake came a minute later, when Page’s clearing kick bounced into the Wentworthville in-goal after winger Kataan Abdul-Wahab had played at the ball, and Newtown’s cheeky flankman Bal Dhadlie pounced for an opportunist try to finish the scoring and make it 30-18. When referee Steve Clarke blew the final whistle the Newtown players seemed slightly stunned, as if in awe of what they had achieved. In the grandstand though, the Newtown supporters in the crowd of nearly 8,000 had been waiting a lifetime for the siren. Grown men hugged each other and some wept unashamedly in joy at the triumph. For a club that had supposedly had both feet in the grave it was a tremendous achievement and laid the foundation for a glorious future.

(Source: Out Of The Blue, The History of Newtown RLFC)