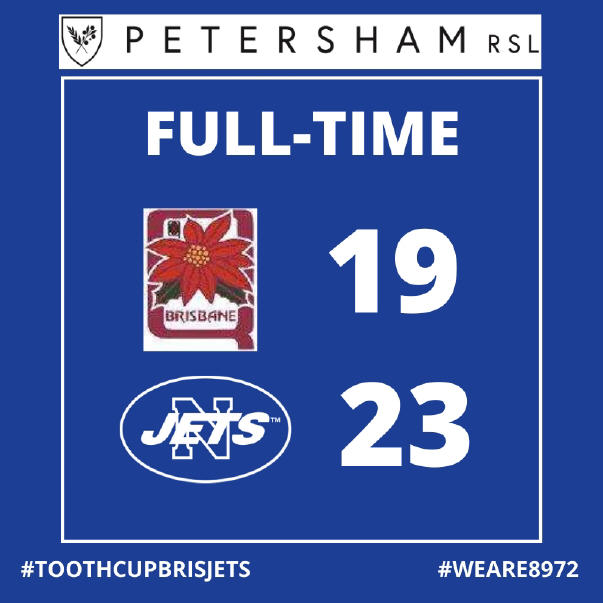 People of a certain age fondly remember the Midweek Cup under its various guises, Amco Cup, Tooth Cup, KB Cup, National Panasonic Cup and finally the Panasonic Cup. The midweek competition pitting Sydney Premiership teams against representative sides from all parts of Australasia was a staple of TV programming during the 1970s and 1980s.

On the evening of 29 April 1981, the Newtown Jets arrived at Lang Park for the opening game of their Tooth Cup campaign. Their opponents that evening were Combined Brisbane, a representative team made up of the best 13 players from across the Brisbane Rugby League competition.

The drama started for Newtown before they’d even arrived in Brisbane. On the morning of the game, the players flew to Brisbane on a DC-3 passenger plane approaching the end of its service. The rickety old plane flew threw an electrical storm. Several players were violently ill as a result of the turbulence.

Despite their underdog status, the Jets came out firing early with a nice backline try to Brian Hetherington giving them a 5-2 lead at the end of the first quarter. They further extended this lead early in the second quarter when John Ferguson, Ray Blacklock and Phil Sigsworth orchestrated a 75 metre try for fullback Mick Pobjie. Newtown weren’t done with their spectacular tries though, with a mesmerising run from Ferguson and brilliant support play from Graeme O’Grady laying on a try for Steve Blyth minutes later.

Leading 11-2, Newtown looked to be cruising, but then Brisbane’s big guns came to life. Midway through the second quarter, Greg Oliphant’s long pass found Chris Close out wide, with the Queensland Origin centre using a potent mix of speed and strength to barge over. Next to cross was Lewis who scored after winning the race to his own bomb and with Meninga converting both tries, the Queenslanders took a 12-11 lead into the half-time break.

Skipper Ken Wilson got the Jets back in the lead 13-12 when he nailed a penalty goal two minutes after the resumption, while Sigsworth added the Blues’ fourth try when he scored from dummy-half in the 48th minute. Newtown ultimately sealed the game midway through the third quarter when Mick Pitman completed another left-side raid to give them a 23-12 lead.

To their credit, Brisbane fought hard to the end and added a penalty goal and the last try of the game, scored by Norm Carr, to make the final score line 23-19 in favour of Newtown.

The result – like the Midweek Cup itself – is often overlooked in the modern era but it deserves a greater appreciation. The Jets defeated a virtual Queensland State of Origin team at Lang Park having travelled to Brisbane the day of the match.

Ferguson was named man of the match, even though he rarely handled the ball. When he did have possession he bamboozled the Brisbane defence, scoring a try and having a heavy involvement in two others.

Newtown scored five tries to three and deserved victory, even though Brisbane almost snatched a win at the end when halfback, Greg Oliphant claimed a try after Newtown made a mess of a bomb. But referee, Eddie Ward ruled a knock-on and the inner city Sydney club left the stadium with bragging rights.

Ferguson, then 26, was spending his first season in Sydney after playing most of his football in the bush. The Grafton product would go on to play three Tests for Australia and eight State of Origin matches for New South Wales.

Many of the Brisbane players thought half-back, Ken Wilson was a major contender, given the way his long kicking game had them on the back foot. Brisbane coach, Arthur Beetson had pinpointed Wilson as the danger man, but the home team had no answer to his tactics.