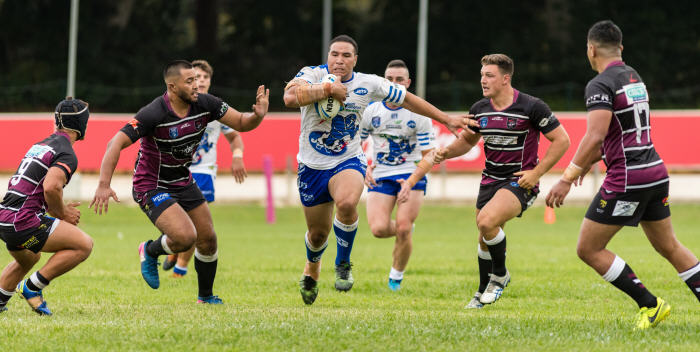 Rugby League returned to Wentworth Park on Sunday, 11th February for the first time in many years, with the re-born Glebe Dirty Reds and the Newtown Jets both playing pre-season trials against the Blacktown Workers Sea Eagles.

In the Ron Massey Cup trial match that kicked off at 3.00pm, Blacktown Workers defeated Glebe 34-26 after leading the Dirty Reds 18-8 at half-time.

In the Intrust Super Premiership (ISP) NSW main game that commenced at 5.00pm, the Sea Eagles beat the Jets 24-4 after going in at half-time with a 12-4 lead. The Sea Eagles are Manly-Warringah’s official partnership club in the ISP NSW competition.

Prominent rugby league identities seen in the crowd were the NSW Rugby League CEO, Dave Trodden, and the NSWRL’s General Manager of Football, Barrie-Jon Mather. Rugby league icon Cliff Lyons was also spotted in the crowd. Cliffy had a nephew playing for Newtown in Royce Tout, while Sean Garlick and Darrell “Tricky” Trindall were also at the ground to see their sons Jackson Garlick and Jake Trindall in action. The distinguished rugby league historian and statistician David Middleton was also on hand to take in what was very much a “feel good” occasion in rugby league history.

The Glebe RLFC officials deserve plenty of praise for the fine presentation of the afternoon. The Dirty Reds were appearing at Wentworth Park for the first time in eighty-nine years while the Jets (formerly Bluebags) were back at the ground after a ninety-one year absence. It is also worth noting that Glebe had played Newcastle in round one of the NSWRL first grade competition at Wentworth Park on the 20th April 1908, nearly 110 years ago! NSWRL CEO David Trodden commended the Glebe and Newtown clubs for bringing rugby league back to a venue that is very much one of the rugby league game’s sacred places.

All told, there was a real sense of history being enacted at the old ground and there clearly was an atmosphere of good-will amongst the 1100-strong crowd.

The Dirty Reds will be playing in partnership with the Burwood RLFC in the 2018 Ron Massey Cup competition and they are a feeder club to the Newtown Jets for the 2018 season.

No doubt rugby league people everywhere extend good wishes to the Glebe Dirty Reds on their astonishing and heart-warming return to our game.

The Glebe Dirty Reds team was: