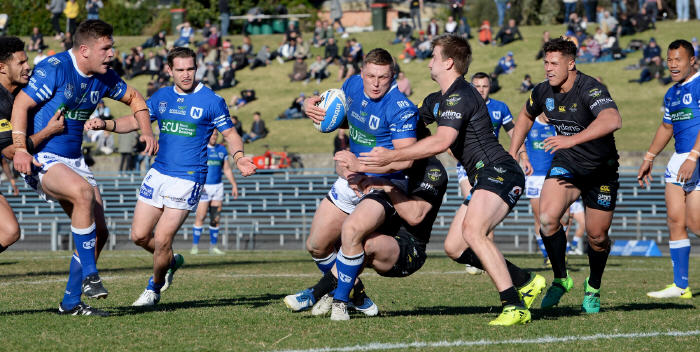 The Newtown Jets and North Sydney Bears square off tomorrow in the deciding match of the 2017 Frank Hyde Shield series.

These two 1908 foundation clubs have the greatest of admiration and respect for each other, but there are no holds barred when it comes to claiming bragging rights for the annual Frank Hyde Shield. The trophy is played for each year in memory of one of the greatest identities in the history of rugby league in Australia. Frank Hyde played with distinction for both Newtown and North Sydney, and was captain of the Shoremen when they played Newtown in the 1943 first grade grand final at the SCG. Frank went on to an outstanding career in radio broadcasting and journalism, winning the rugby league broadcast ratings for more than thirty years in a row.

Newtown beat North Sydney 16-12 on the 14th May at North Sydney Oval in the first leg of this year’s Frank Hyde Shield series. If North Sydney wins at Henson Park tomorrow, the Shield winners will be decided on points for and against.

There were some tremendous statistics recorded in last Saturday’s close encounter between Newtown and Mounties. Kurt Dillon, the pre-eminent front-rower in this year’s ISP NSW competition, made 50 tackles and ran 204 metres. Young lock Jayden McDonogh also made 50 tackles; backrower Jaimin Jolliffe made 49 and hooker Adam Clydsdale made 37.

This article from the NRL website places Henson Park on the Ladies Who League bucket list of favoured rugby league grounds:  http://m.nrl.com/ladies-who-league-rugby-league-bucket-list/tabid/10874/newsid/111360/default.aspx

And here’s a Metro Cup-oriented quiz to honour the anniversaries of these premiership titles:

Name the players who were in all four of those Newtown RLFC Metro Cup first grade premiership-winning teams of the 1990’s. (The players nominated can be from the starting line-ups or the listed reserves.)

The first correct entry emailed to jets@newtownjets.com will receive an item of Newtown Jets merchandise.