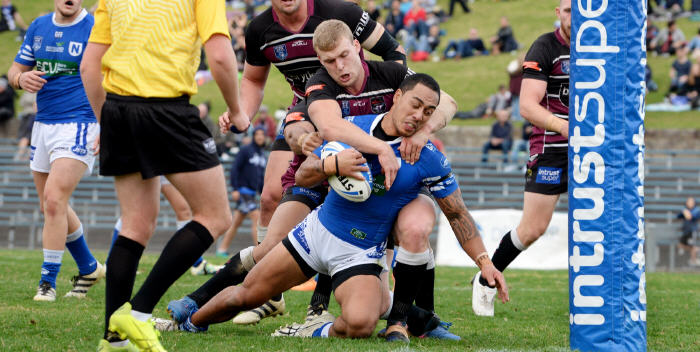 Kurt Kara scores for the Newtown Jets against the Blacktown Workers Sea Eagles at Henson Park on the 17th June. There’s no doubt that Kurt Kara is made of the same stuff as the best of the greats from Newtown’s past over the last 109 years. Photo: Michael Magee Photography

It’s the biggest day this year at Henson Park tomorrow – we suggest you get there early!

The 2017 Beer, Footy & Food Festival is on at Henson Park on Saturday, 22nd July, starting at 12 noon and going to 7.00pm. There will be no public parking available inside the ground, so please make other parking arrangements.

One of Newtown’s finest and a genuine working-class hero, Kurt Kara, plays his 150th competition game with the Newtown Jets tomorrow. Ironically it is against a club with whom he spent some time in a development squad, the New Zealand Warriors. Kurt also played NSW Cup with Western Suburbs prior to signing with Newtown in 2011.

The match will be broadcast live on Steele Sports, www.steelesports.com.au

Here is a superb video tribute to Kurt Kara on his 150 games milestone: https://www.youtube.com/watch?v=MHuK0zEe0B4

And the NSWRL have placed a fine tribute to Kurt on their website: http://www.nswrl.com.au/news/2017/07/21/for_the_love_of_the_.html

Plus it was Kurt’s turn for the Truth Booth: https://www.youtube.com/watch?v=lUEO6-Zhh6Q