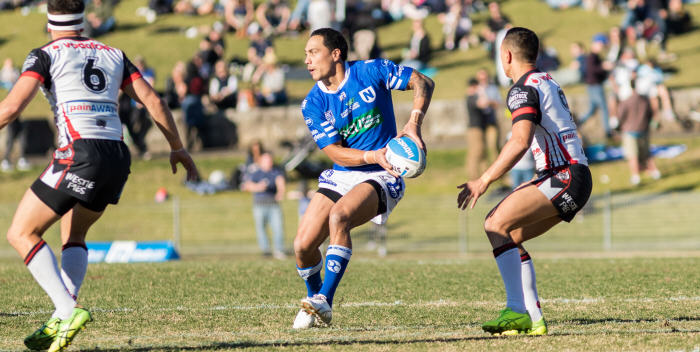 The biggest day of the year proves inspirational for the Jets

It was all happening at Henson Park on Saturday … there was glorious winter sunshine; a crowd of more than 6000 rolled in for the 2017 Beer, Footy & Food Festival; the Jets won their first home game this season, beating the second-placed New Zealand Warriors 38-12 in the process; and one of Newtown’s most loyal and hard-working players, Kurt Kara, played his 150th game in the royal blue colours. The man of the day even kicked a goal to mark the big occasion! To cap off a day of many highlights, Kurt’s family members and close friends plus several Jets team-mates and Warriors opponents performed a mass Haka after fulltime to pay tribute to Kurt’s rugby league achievements. This truly was a Henson Park day to remember.

The Beer, Footy & Food Festival held at Henson Park was an unqualified success.

There were 26 marquees in place around the ground dishing out craft beers and ciders, as well as various ethnic cuisines from a range of inner-western eateries.

The crowd for the Newtown Jets  versus New Zealand Warriors match was estimated to be in excess of 6000.

And to top it off, Newtown turned on their best display of the year (and their first home ground win this season) in winning 38-12.

The post-match Haka honouring Kurt Kara (and his 150 games for Newtown) on this clip is nothing short of spine-chilling:

The Haka was performed by members of his family (his Whanau), and also his Newtown Jets team-mates and New Zealand Warriors opponents of Maori heritage.

Venerable Henson Park, for so long an Irish-Australian Catholic cultural stronghold, has never known such a warlike Polynesian chant to reverberate around the old ground!

Ruben Wiki, the man with the most international appearances of any rugby league player in history, was Head Trainer for the Warriors on Saturday.

The Warriors kicked off, running to the northern end.

7th min: Penalty to Newtown on their own 20 metre line near the NE corner

8th min: Jets looking dangerous at the Warriors end, but the ball goes to ground.

10th min: Warriors with the ball inside Newtown’s 20 metres. They are tackled on the last without getting to the kick.

15th min: Warriors lose the ball 30 metres out from their own line.

17th min: Very average end of set kick by the Warriors at Newtown’s end of the field

18th min: Penalty to Newtown 30 metres out from Warriors line

22nd min: Paulo puts a controlled grubber kick in behind the Warriors defensive line; ball bounces off a defender and Paulo grounds the ball for a try.

Jordan Topai-Aveai had made a great run down the eastern sideline to give Newtown strong field position.

Another penalty to Newtown midfield in 25th min.

28th min: Paulo is on fire as he sends Sam Tagataese over to score near the SE corner. Paulo converts from wide out.

Massive surplus of possession and field position to Newtown so far this half.

Warriors get their first penalty in 32nd min.

Warriors finally get another set inside Newtown’s 20 metres but fail to complete the set.

35th min: Another penalty to Newtown in midfield. The Warriors are really having “the cat o’ nine tails” applied to their backs.

37th min: Penalty to Warriors 40 m out from Newtown’s line but the set ends ineffectively.

The atmosphere inside the Newtown dressing room at half-time was highly energised to say the least.

Coach Matterson told his players to forget about their 28 points – start again with a clean slate.

Beware of the Warriors ability to fight back and to score points quickly.

Shut down their late off-loads.

Newtown kicked off to the northern end.

2nd min: Penalty to Warriors 40 m out from their own line

Warriors have repeat sets at Newtown’s end but good defence holds them out.

15th min: Jets on the attack and a kick into the Warriors in-goal is grounded by Reubenn Rennie 10 m in from NE corner

Jets are on the attack inside Warriors 20 m, and some crisp short passing sees Tagataese crash over to the left of the northern posts

28th min: Try to Warriors by Palavi after good lead-up work by Cherrington and Tevaga. Converted by Pauga. Newtown 38-6 with 11 mins to go

Relieving penalty to Newtown 30 m from their own line

More well-crafted attack from the Warriors but Jets force the ball dead in 36th min.

Jets put together some razzle-dazzle attack but final pass tapped back inside goes astray in 38th min.

Warriors break through and Santo sets up a try for Cherrington.

Converted by Junior Pauga. Newtown 38-12 in 40th min of second half.

The Newtown Jets have another bye next weekend (29th/30th July) in Round 21.