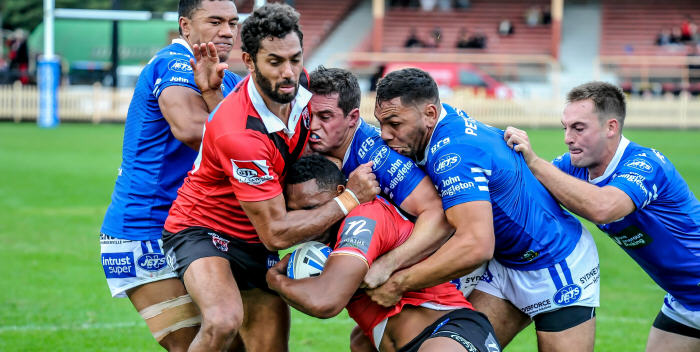 There was very little in this game and although the Bears had a greater share of possession in the second half, Newtown’s determined and disciplined defence held the line when most needed. The scores were locked up at 12-all with eight minutes left to play, when the Torres Strait Islands Express, Edrick Lee, snapped up an intercept and raced ninety metres to score what was to be the winning try.

This match was broadcast by Steele Sports, www.steelesports.com.au

North Sydney wore replicas of the jerseys they wore in the 1943 Grand Final against Newtown.

This match was also the first leg of the 2017 Frank Hyde Shield series between these two 1908 foundation clubs.

This was a very even contest in the first 15 minutes.

Both teams challenged each other’s tryline.

16th min: Inside pass from Fa’amanu Brown sends Jesse Ramien over to score to the left of the southern end goal posts.

Norths turned over a lot of ball in the first half and gave Newtown a surplus of possession.

35th min: Norths get some extended time in possession at Newtown’s end.

Winger Braidon Burns scores to the right of the goal-posts.

Newtown running to the northern end.

45th min: Superb delayed pass by Nu Brown gives Jordan Drew the chance to use his strength to crash over 10 metres in from the left hand touchline.

55th min: Norths applying a lot of pressure down their left-side. Good ball play and a classy off-load by Dane Nielsen puts Sitiveni Moceidreke over in the left corner.

Matt Evans does a great job in cleaning up Norths grubber kicks into the in-goal, showing anticipation and courage.

72nd min: Norths attack up Newtown’s left side but an adventurous pass is seized upon by the remarkable Edrick Lee, who outpaces several pursuing Shoremen as he races 90 metres to score in the north-west corner.

79th min: Norths in possession in Newtown’s 20 metre zone and they turn on the razzle dazzle as they attempt to pull off a last-minute try.

The Jets cut down their errors and continued to improve their defence.

This was a valuable and brave win.

Penalties for the match: Newtown 8-6.