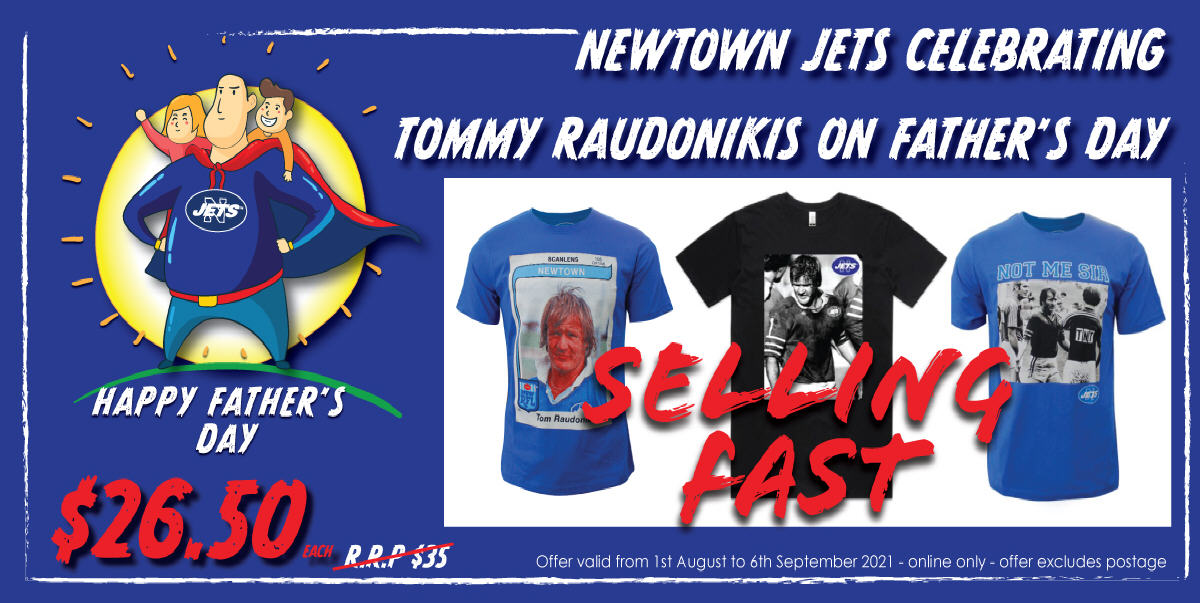 The Newtown Jets have two great packages for you to choose from in selecting your gift (or gifts) for Father’s Day.

Make your choice from one (or more) of the iconic Tom Raudonikis T-Shirts at $26.50 each (pictured above), or you can choose the Newtown for Father’s Day package, which comprises a Newtown crew jumper and a Newtown Jets cap marked down to $85.00 from $110.

These offers are valid from the 1st August through to the 6th September 2021.

The offers are available by online only and they exclude postage charges.

Place your orders through:  www.newtownjetsclothing.com.au

Make this a special day for your Dad with one of or both of these exceptional Newtown Jets offers!

Australia Post is experiencing some delays due to local restrictions and increased volumes.

Grant Millington, the powerfully-built back-rower with the silky ball-handling skills, came through the Sydney Roosters development system and played with the Newtown Jets in the NSWRL Premier League in 2006 and 2007.

He then played with the Cronulla Sharks and the Canterbury Bulldogs, before moving on to the Castleford Tigers in the UK Super League in 2012.

Grant has since put in an amazing ten seasons with the famous Tigers, also known as “Classy Cas”.

Since signing with Castleford, Millington became a genuine fans favourite due to his consistency and commitment. He is utilised as a skilful, ball-handling and intelligent prop / second row forward and has even been called upon to cover in the halves on occasion. He is widely recognised by Castleford fans as one of the club’s greatest-ever imported players.

On 17 July 2021, he played for Castleford at Wembley Stadium in their courageous 2021 Challenge Cup Final loss against St. Helens.

Here’s an interview Grant gave on BBC West Yorkshire on the 28th August in announcing his retirement from professional rugby league:  https://twitter.com/newtownrlfc/status/1431440491266994176

The Newtown RLFC extends congratulations to Grant on his outstanding career in the rugby league game, and best wishes to him in his retirement.

Here’s a photo of Grant Millington playing for Newtown against the Cronulla Sharks at Henson Park back in 2007 (Photo: Mike Biboudis).