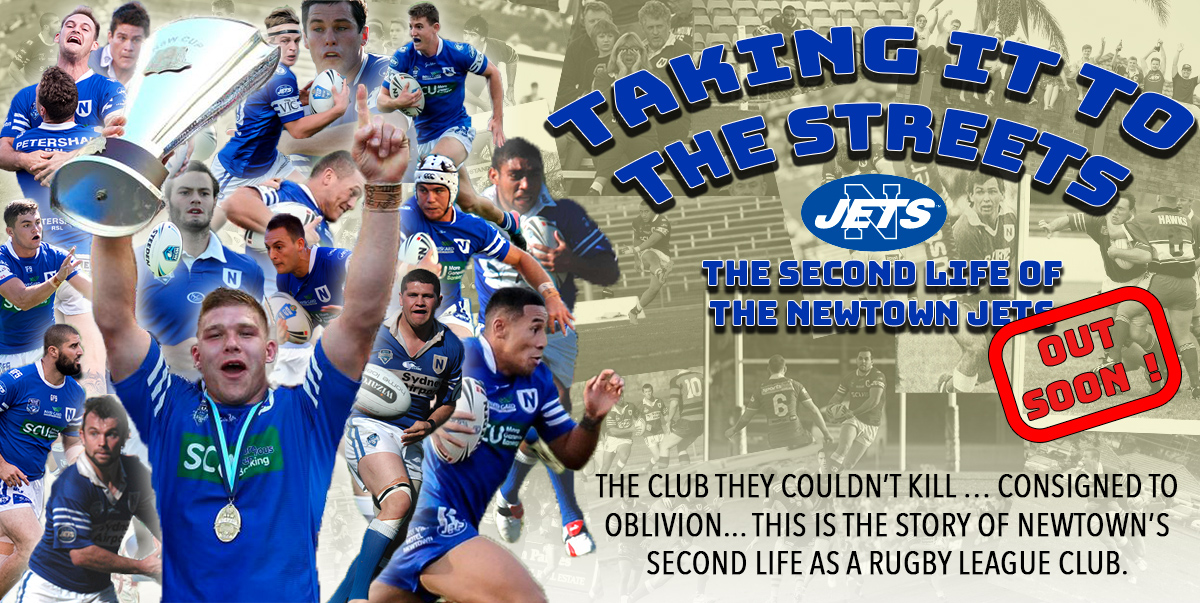 Taking It To The Streets – The Second Life of the Newtown RLFC: the remarkable and uplifting story of the Newtown Jets’ second life in rugby league football

Taking It To The Streets – The Second Life of the Newtown RLFC will be available in late July.

This book is an updated version of the history of the Newtown Jets that focuses on the club’s second life in rugby league from 1991 to 2018. Along with many anecdotes, photos, interviews and observations, this book looks at how the Newtown club has survived and reinvented itself in greatly-changed times.

“The modern saga of the club that refused to die is one of the great and inspiring tales of modern rugby league” … Ian Heads (respected Australian sports journalist, author and historian).

“This is the classic tale of re-invention, of a club that wouldn’t lie down and die” … Dave Hadfield (award-winning English rugby league journalist and author).

“The Newtown Jets’ recent history is about passion and the Australian spirit, about overcoming adversity and surviving against the odds” … Anthony Albanese MP, Leader of the Federal Opposition.

“This book is an important record of a landmark period in this old club’s history … the author Glen Dwyer is uniquely positioned and qualified to tell the story of Newtown’s recent history” … Terry Williams (rugby league author and historian).

“This is the rugby league club that was consigned to oblivion in the middle 1980s, and now proudly competes again in a high standard rugby league competition. The old club attracts good crowds to its spiritual home, Henson Park, and has really connected with the modern version of inner-western Sydney and its new population” … Ron Sparks (radio broadcaster, journalist and program manager formerly with 2SM, 2UW, Triple M, 2Day FM and WSFM.)