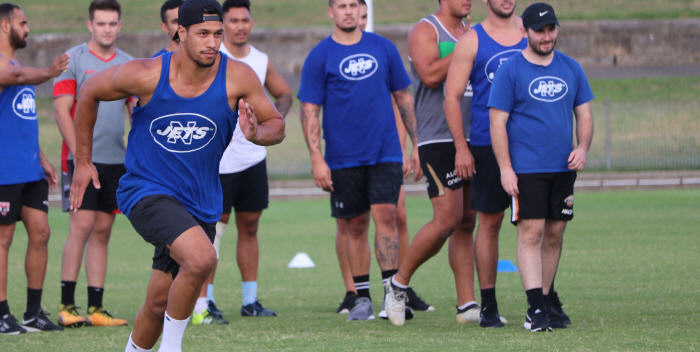 Winger and centre Ozzie Tuwhangai hails from the Waikato Rugby League (NZ) competition and was referred to Henson Park by none other than one of our all-time favourite former players, Kurt Kara. Ozzie is pictured striding out in a training exercise at Henson watched by several other pre-season training squad members. Photo: Wayne Leong Photography

The ISP NSW draw for 2018 is now available and can be viewed on this link:  http://bit.ly/2rW1d2M or on the NSWRL website: www.nswrl.com.au

Several important features of this year’s draw will be highlighted and explained in later newsletters.

For the moment here are some notable aspects of the 2018 draw:

ISP NSW games are going to be shown live on both Fox Sports and Channel Nine.

The Newtown Jets are scheduled to appear four times on Channel Nine and once on Fox Sports.

Newtown’s first home game for 2018 is against St George-Illawarra at Henson Park on Saturday, 7th April at 3.00pm.

The Reunion Day match for 2018 is against Western Suburbs at Henson Park on Saturday, 25th August at 3.00pm.

Here are the details for all three of Newtown’s 2018 trial games:

The Newtown RLFC has signed front-rower and lock forward Matthew Jurd. He was formerly with the St George-Illawarra Holden Cup squad and the Illawarra ISP NSW team. Matthew is 21 and weighs in at 108 kg.