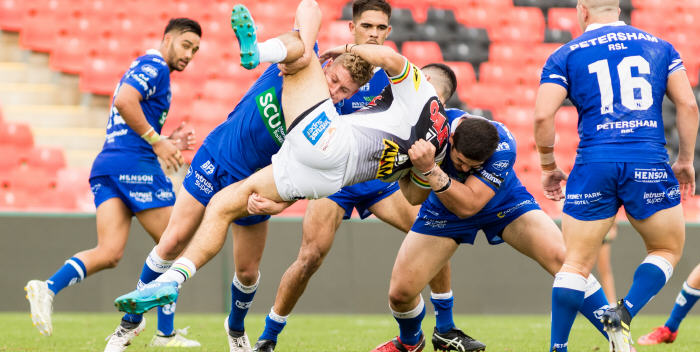 The Newtown Jets defeated the 2017 Intrust Super Premiership champions Penrith 36-12 at Panthers Stadium on Saturday afternoon. The Jets dominated the first half and led 22-0 at halftime. Newtown scored a total of six tries to two in this emphatic victory, and set the scene for their first game back at home at Henson Park next Saturday.

The Jets completed 22 out of 25 sets in the first half and had 68% of possession. Centre Aaron Gray scored twice in the first half while wingers Matt Evans and Bessie Aufaga-Toomaga also scored tries. Penrith hit back with a converted try early in the second half but a superb try to Jets centre and Cook Islands international Reubenn Rennie twelve minutes into the second session put Newtown in a very strong position. Second-rower Billy Magoulias scored the Jets’ sixth and final try three minutes out from fulltime. Halfback Kyle Flanagan converted five of the tries and kicked a penalty goal.

Newtown’s captain and second-rower Scott Sorensen was judged as man of the match, while props Kurt Dillon and Braden Uele worked hard through the middle. Hooker Blayke Brailey was once again extremely efficient out of dummy-half, while halves Kyle Flanagan and Jack Williams combined well and provided good ball for Newtown’s backs.

The Jets return to Henson Park for the first time this season when they play St George-Illawarra next Saturday, 7th April, at 3.00pm.

This match was televised live on Channel Nine.